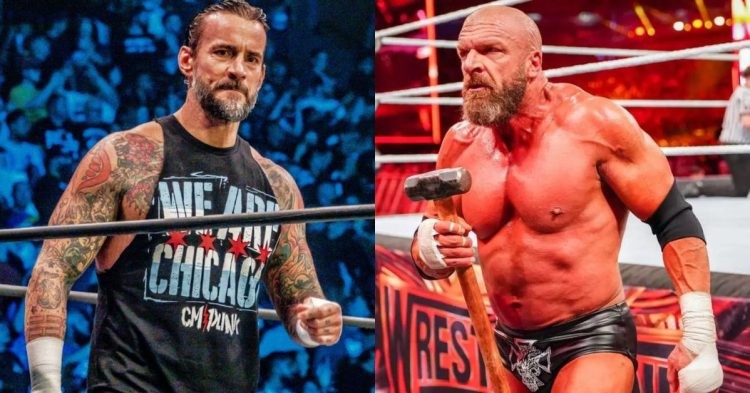 WWE Hall of Famer Teddy Long feels Triple H can get Punk to return to the WWE. CM Punk has been the focus of attention since he released a shoot promo with Adam Page earlier this year. The brawl following AEW All Out was merely another nail in his coffin.

CM Punk’s WWE career came to an abrupt end following the Royal Rumble in 2014, when he became dissatisfied with the company and walked away. Punk had previously stated that he would never return to professional wrestling, but he broke that promise last year. Teddy Long believes Triple H can convince CM Punk to return to WWE during his AEW suspension.

Teddy Long and Bill Apter discussed Punk’s potential comeback to WWE at Royal Rumble 2023 on their recent podcast The Wrestling Time Machine. The former SmackDown GM feels the AEW star and Triple H can put aside their differences and cooperate on the big W.

Teddy said, “Well, like I said, I know guys who worked with guys every day who didn’t give a damn about each other, but they worked together.” Bill Apter then proposed that Punk be a surprise entry in the men’s Royal Rumble much to the excitement of the people in attendance.

Teddy replied, “Did you know? Here it is. Number 28 at the Royal Rumble, running down the ramp and no one expected it! My God, it’s CM Punk! Well, I guarantee that would get a standing ovation”

Teddy Long discussed CM Punk’s pro wrestling future with Wrestling Inc. Teddy stated, “These are two grown men, and I think that they can sit down and they can talk and they can settle their differences,” Long said. “If Hunter sees that there’s money still in CM Punk, then Hunter will act on it. And I think CM Punk, like I said, ain’t a guy out here looking for a job. I think he just wants to be treated right, and whatever angle or push they’re going to give him, he just wants to have them do it right … I think they could bury the hatchet, and I think it would work.”

Triple H understands what is best for the business CM Punk’s Returning to WWE may bring in more fans. CM Punk is still the hottest commodity in professional wrestling, and despite his ‘not best in the world’ in-ring ability, he can still pull off a few good matches and feuds.

What went wrong between Triple H and CM Punk?

There’s no denying the heat that existed, and possibly still exists, between Triple H and CM Punk throughout the years, with problems developing from Punk’s early days in WWE until his departure.

When Punk first joined WWE and wrestled a dark bout, Triple H and Shawn Michaels were not impressed and made their feelings clear, as told by Bruce Prichard, who stated that the DX members wanted to bury him.

Punk and HHH were embroiled in a storyline and had an on-screen feud in 2011, and during his iconic Pipebomb promo, Punk also took digs at Triple H. They later clashed in a match at Night of Champions, but Triple H won by utilising his backstage clout to destroy Punk’s push. Many believe that this heightened their hatred, leading to Punk’s departure from WWE.