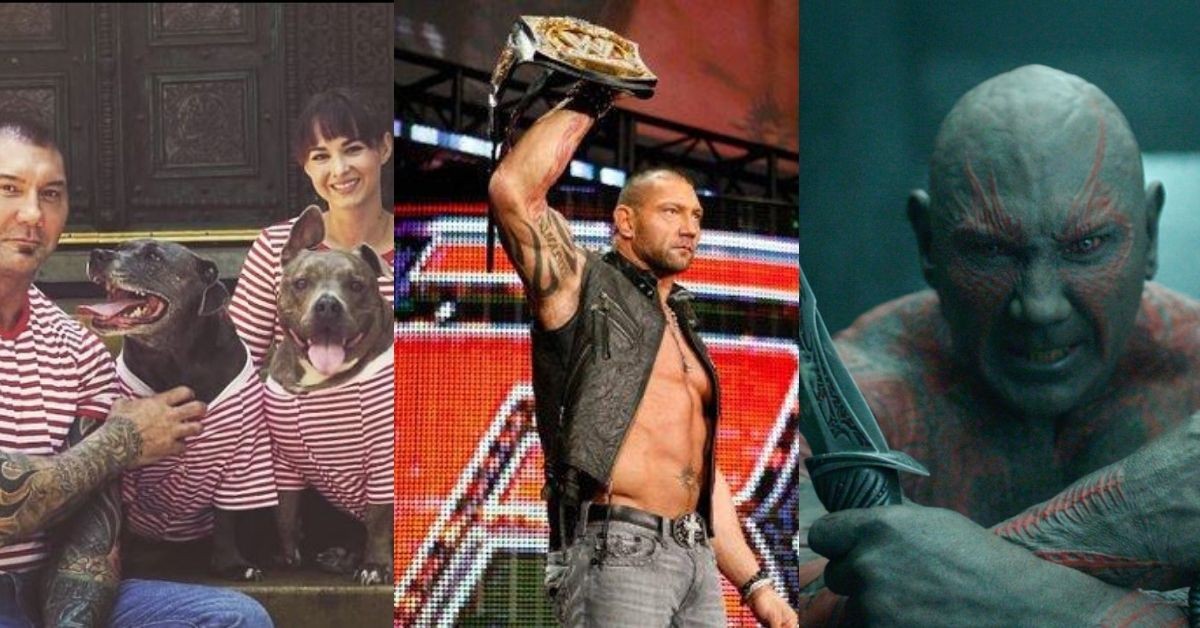 This week marks 20 Years of Batista in the WWE. The Animal is one of the most-celebrated WWE Superstars of all time, with a Hall of Fame career in his rear view lens. As his next on-screen appearances draw closer, with “Thor: Love and Thunder” slated for a July 6th release, we thought it would be a good time to tell you all you need to know about Batista.

What is Batista’s real name? Everything about his personal life and family

David Michael Bautista Jr. was born on January 18th, 1969 in Washington D.C. He is the son of Donna Raye and David Bautista Sr. He is part-Greek and part-Filipino. His grandparents were Filipino immigrants to the US. His grandfather earned his citizenship by fighting for the US during World War 2.

Growing up, Batista had a rough childhood. He recalled that he had witnessed 3 murders before he reached the age of 9 in his book Batista Unleashed. He has cited his mother as his biggest inspiration. Being a person on the LGBTQ+ spectrum, her life experiences directly influenced Batista.

Before he decided to pursue combat sports, Batista was a bouncer at a local DC pub. He had always been a fitness freak, and the gym was his paradise.

After facing legal troubles during his time working as a bouncer, and going so broke that he couldn’t afford presents for his wife & children, Batista decided to pursue wrestling as a career.

Is Batista Married? All about his ex-wives, children & past girlfriends

Dave Bautista has been married thrice in his life. He has 2 daughters- Keilani (32) and Athena (30) – from his first marriage to Glenda Bautista. The couple were married in 1990, and got a divorce in 1998, after spending 8 years together.

Batista’s second marriage was to Angie Lewis. This relationship also lasted for about 8 years, as the pair were married in 1998 and divorced by 2006. They have a son together, called Oliver.

Batista dated several female WWE Superstars during his time with the company. His most notable relationship would be with former Women’s Champion Melina, which caused both of them serious backstage troubles. His third marriage was with competitive pole dancer Sarah Jade.

The couple were married for 4 years and separated in 2019.

What is Batista’s favorite hobby? Does he have pets?

We kid you not; it’s collecting vintage metal lunchboxes. He picked up this hobby during his 2nd marriage to Angie, and has been going strong ever since.

Batista also happens to be a massive fan of dogs! He owns 3 himself; their names are Frankie, Janie & Sadie.

He affectionately calls his 3 dogs his “babies” and, like any proud dog parent, makes sure to document them wherever they go. Even if they roll their eyes at him!

It’s clear for us to see that Batista shares a truly deep relationship with his beloved pets.

To the point he’s even got tattoos of them so he can “carry them around with him” wherever he goes!

Leviathan: How did Batista get started in professional wrestling?

By 1999, Batista was pretty much in a rock-and-a-hard-place situation financially, so he decided to dedicate himself fully to professional wrestling. His first attempt at becoming a wrestler failed, though.

Batista joined the WCW Power Plant in 1999 and was told to his face that he didn’t have what it takes to become a superstar. So he took his ball and went to the WWF, who assigned him to begin his training under Afa Anoa’i; the uncle of Roman Reigns.

In the year 2000, Batista signed a developmental contract with the WWF. He debuted in Ohio Valley Wrestling as the cosmic monster “Leviathan”. He was aligned with the Disciples of Synn stable, and even had a match with Kane in OVW.

He’d go on to win the OVW Heavyweight Championship, holding it for a cup of coffee, then dropping it to The Prototype; someone you know as John Cena today. After spending 2 years in OVW, he would be called up to the main roster as part of SmackDown.

Batista debuted on the main roster as the disciple of Reverend D-Von Dudley. Called Deacon Batista, he was still far away from The Animal we’d come to know in later years. Just look at that ridiculous chain! Yikes!

Thankfully, WWE realized just how dead the Deacon Batista character was. After keeping it around for a conclusive feud with D-Von, which saw his disciple go over, Batista would be aligned with a group that would become a part of his legacy.

How Batista became the biggest superstar in Evolution and WWE

Out of all the members of the seminal Evolution stable, Batista was the last to hold World Championship gold. But the wait would be worth it. The Animal was a poised to break out as Evolution’s biggest superstar; and he did so with an iconic “thumbs down”.

After defeating Triple H at WrestleMania 21 to win the World Heavyweight Championship, Batista rose to bona fide main-event status. From 2005, when he won his 1st world title, to 2010, when he’d depart WWE for the 1st time, Batista held World Championship gold 6 times.

That’s an average of over one title reign a year; something not even John Cena can lay claim to. Batista had some of the most memorable feuds in WWE history, with Eddie Guerrero, Rey Mysterio, The Undertaker, and even The Great Khali!

No matter who he stepped into the ring with, Batista made sure everyone came out of his matches looking like a superstar. But sometimes that isn’t enough to keep a creative going in his field of excellence.

The Animal has had 2 rather public exits from WWE. The 1st was rather quiet, and it frustrated him to no end. When Batista left WWE in 2010, he had a legitimately broken back, having compressed his L1 spinal bone during his final match against John Cena.

His 2014 exit looked like it was predicated upon the fan backlash he was facing, but he revealed that it was actually because he was promoting Guardians of the Galaxy at the time, and that his last month with the company was “an extension”.

Dave Bautista, try as he might, could not seem to convince his peers that he was the superstar he thought he was. In a 2017 interview with DeadDaily.com, he revealed that Triple H & Stephanie McMahon thought Guardians of the Galaxy would not “do well.”

Batista has been very vocal about his dislike for the way WWE conducts business. He has stated in interviews that he would prefer doing Live Events to TV appearances, just because of how much politics goes on behind the scenes.

After his disastrous 2014 return, it looked like the WWE Universe would never see The Animal in action again. All that changed in 2019, when they finally gave him what he wanted; one last match with Triple H, at WrestleMania 35.

After proving his worth as a legitimate draw to Vince McMahon and every other higher up in WWE, Batista was able to have the retirement match he always wanted to have.

@WWEUniverse Thank you for letting me entertain you. I love this business and whether you cheered me or jeered me, I’m grateful for being a small part of your life. I am officially retired from sports entertainment and I am grateful for every second of my amazing journey ✌🏼

Is Batista in the WWE Hall of Fame?

This one’s tricky to answer, really. Technically, yes. Batista was announced as the headliner for the WWE Hall of Fame Class of 2020.

But he had to pull out of the ceremony owing to prior commitments, and given the global pandemic that was unraveling at the time.

To the @WWEUniverse Unfortunately due to previous obligations I am unable to be a part of the @WWE #HOF this year. By my request they have agreed to induct me at a future ceremony where I’ll be able to properly thank the fans and people who made my career possible🙏🏼 #DreamChaser

Batista is already a first-ballot Hall of Famer in our eyes. It’s just a matter of when he will get his induction, not if!

Where is Batista these days?

While Batista has stepped away from the squared circle, he hasn’t disappeared from our screens altogether; on the contrary, he will be literally everywhere in a couple months, and later this year! Drax The Destroyer is coming back to our screens in July, after all!

Dave Bautista counts himself amongst the only WWE Superstars blessed enough to have had a successful Hollywood career. He’s been in a James Bond flick, worked alongside Dennis Villeneuve, and can claim to be a bigger superhero than John Cena or The Rock!

Batista is arguably wrestling’s first legitimate superhero. His work as Drax The Destroyer in the MCU is a delight to watch, and we get a double-dose of Drax this year; with “Thor: Love and Thunder” in July, and the “Guardians of the Galaxy Holiday Special” slated for a December release.

As The Animal completes 20 years in professional wrestling, we cannot help but celebrate his accomplishments. Batista will forever be remembered as one of the last truly great Heavyweights of WWE.