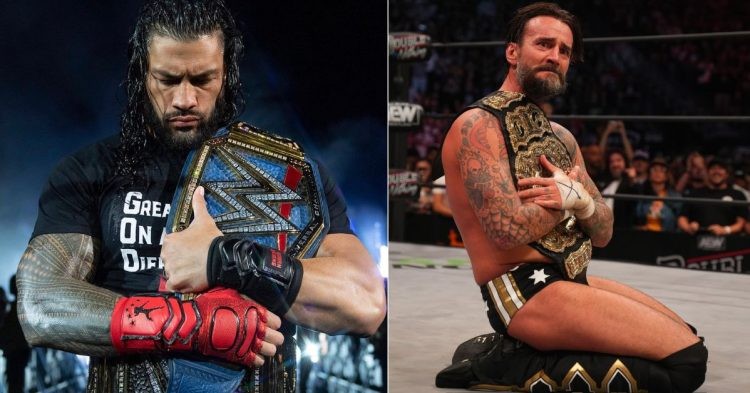 WWE and AEW could find themselves in a bit of a predicament. The Undisputed WWE Universal Champion Roman Reigns has adopted a lighter schedule since signing a new deal with WWE. Recently, WWE also faced another injury incident, with Cody Rhodes suffering from a torn pectoral muscle injury.

WWE sent out the following email to fans that Money in the Bank will now take place at the MGM Grand Garden Arena pic.twitter.com/HC2h4nhpqe

In AEW, CM Punk became the World Champion after defeating Hangman Adam Page at Double or Nothing. He had injured himself during the match and is taking time off from television. Both promotions are facing a lack of star power in their respective rosters.

Roman Reigns’ last match was a 6-man match where he teamed up with the Usos to take on RK-Bro and Drew McIntyre at WrestleMania Backlash. He hasn’t wrestled on camera ever since. Moreover, some of the household SmackDown names in WWE are not doing so well. It was seen in the match card for Hell in a Cell, which was dominated by RAW matches.

WWE’s initial plans for Roman Reigns following WrestleMania Backlash was to work in three of the upcoming premium live events against Riddle, Randy Orton, and Drew McIntyre. But those plans had to be snubbed after WWE shifted the Money in the Bank venue from the Allegiant Stadium to the MGM Garden Arena.

While he still holds both the belts, the Tribal Chief is no longer listed for Money in the Bank, but the list of expected opponents has remained the same. However, Cody Rhodes had been the biggest draw in WWE in the absence of Reigns. But, he has now found himself sidelined with a pec injury. He will be out of action for at least the next six months. It isn’t a positive sign for WWE because we are approaching the biggest show of the summer, SummerSlam.

AEW had recently found their top stars injured ahead of major pay-per-views, including their highly anticipated event, Forbidden Door. CM Punk broke a bone in his foot at Double or Nothing and will subsequently be out for a while. The new interim AEW World Champion will be now decided at Forbidden Door.

The winner of the first-ever Owen Hart Foundation Tournament, Adam Cole, also got injured in the same pay-per-view. His injury details are still unknown. Bryan Danielson and Jeff Hardy are also reportedly out of action due to injuries.

AEW’s lack of star power has been an issue for a long time. Earlier this year, Warner Media wanted to bring WWE’s Roman Reigns into Tony Khan’s promotion.

The slew of injuries in both promotions has halted a lot of plans for the summer, which is considered the best season for wrestling. WWE has tried its best to encourage viewers by announcing the return of John Cena to celebrate 20 years with WWE.

There are several developments in WWE that should excite fans, like Finn Balor joining Judgment Day. On the other hand, AEW can benefit a lot if they book the right star as the Interim World Champion, who could face CM Punk after he returns from injury.