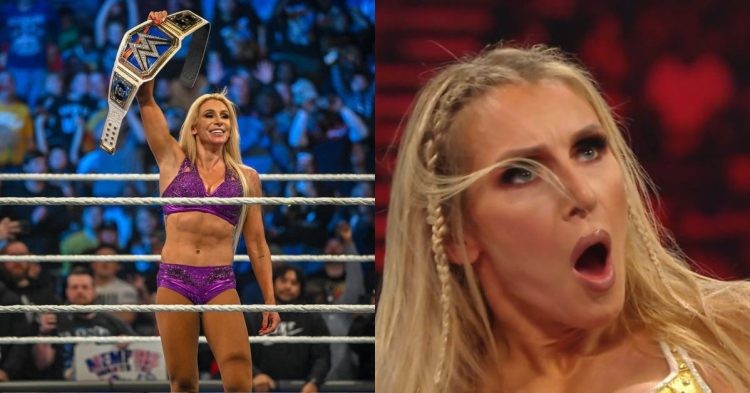 Charlotte Flair forgets she is a babyface (Credits: Wrestling News)

Charlotte Flair embarrassed herself on last week’s SmackDown after an embarrassing incident with WWE official Jessika Carr. Charlotte is now a babyface, but she may have forgotten.

Charlotte Flair has been strongly displayed as a babyface on SmackDown since her return, and while this is a welcome change for fans, it appears that Flair forgot she was a babyface for a short moment. On this week’s SmackDown, Charlotte faced Sonya Deville in a singles match for the SmackDown Women’s title. The Queen defeated Deville and was able to keep her new title.

Following her SmackDown victory over Sonya Deville this week, Flair proceeded to snatch the Women’s Title from the hands of the referee in a heelish manner. Flair immediately realized her mistake and made an apology to the referee. When they both went back, the referee, Jessika Carr, began to smile back, and the two women found great humor in the situation.

We’ll have to wait and see how WWE presents Charlotte Flair as the Smackdown Women’s Champion over the next few weeks. Fans are eager to see what WWE has in store for her as a babyface.

Following a competitive match, Flair would win. Following that, Flair appeared to have forgotten she was a babyface, as she was seen snatching the belt from referee Jessika Carr. Flair had an embarrassing moment with Carr after realizing her mistake and even said ‘thank you’ to save face. Naturally, many fans noticed her blunder.

Fans on Twitter could not even stop laughing after Charlotte’s blunder on WWE SmackDown, and they reacted with hilarious tweets.

The way she took the belt from her 😂 forgetting she’s a baby face now pic.twitter.com/Sj0MnjLAyr

She been heel so long she forgot how to be nice🤣🤣🤣

Charlotte Flair, Becky Lynch, and Sasha Banks all made their way to the main roster in 2015. Flair has been a main roster regular ever since. For the majority of her WWE career, she has played a villain.