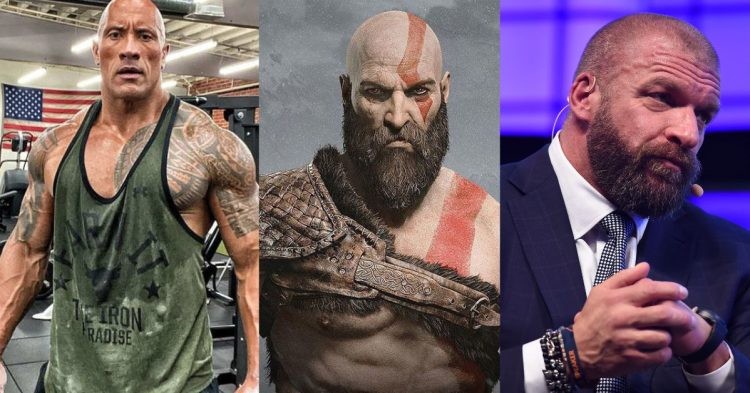 Sony confirmed earlier this year that one of the most popular video games of all time “God of War”, will now be a TV series as an Amazon Prime Exclusive. They haven’t revealed which part of the game will be turned into a show, but Kratos, the main character of the game, will be there. Dwayne Johnson is in discussions to play Kratos as the search for the role’s actor is ongoing. Although Triple H’s contemporary look fits the role quite well, he has long been a favorite fan casting for Kratos.

However, “The Most Electrifying Man in Sports Entertainment” and “The King of Kings” will be battling for the role of Kratos against the game’s original voice actor, Christopher Judge. One Twitter user questioned the purpose behind the search for Kratos when voice actor when Christopher Judge, who has performed in the past two games, might be available.

Judge quickly responded with the word “co-sign,” clearly indicating that he would be keen to aid Kratos in his transition from video games to television. The Rock is already being thought of as an actor for the God of War series based solely on these stats. His massive following might bring the show millions of viewers.

Christopher Judge wants to play Kratos in God of War

Christopher Judge, the voice of Kratos in God of War 2018 and Ragnarok, has expressed interest in playing the role in the upcoming God of War TV Series. Despite the fact that supporters have been outspoken about why Triple H is the ideal fan for the position, few are opposed to it.

Recently a fan on Twitter tweeted “Why is everyone saying that Triple H or Braun Strowman are two of the “perfect” choices for Kratos in a live-action project when @iamchrisjudge is LITERALLY THE FUCKING GOD OF WAR?!”

Responding to this Judge tweeted this:

Judge has been the voice of Kratos in the latest release of the game God of War: Ragnarok and has been doing it since God of War (4) 2018. Fans have voiced their mixed views about Judge playing the role of Kratos as few think he might sound like Kratos but does not look like him.

Kratos is depicted as a strong godly character in the game. Triple H and Dwayne Johnson could do justice with the role as they have the needed look and physique as well.

Braun Strowman is also being considered for the part, along with Triple H and Dwayne Johnson. With so many names being discussed, it would only be a matter of time until the casting is completed and fans could see their favorite game character on television.