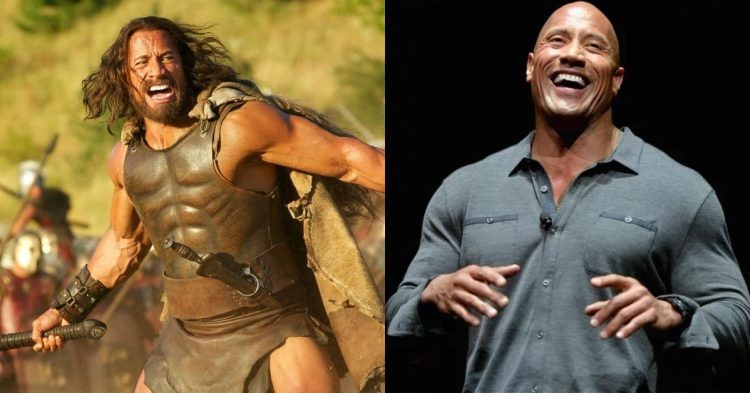 In order to prepare for his part as the Greek demigod Hercules, Dwayne Johnson claims to spend more than three hours per day in the makeup chair, having hair from a yak’s testicles precisely applied to his face.

One of the highest paid action-star, Johnson is compelled to put in a lot of effort. Johnson has consistently demonstrated a commitment to producing high-caliber movies. His films and their results frequently reflect his tenacity and perseverance.

Johnson appeared in an interview with Conan O’Brien to promote his movie, Hercules. He revealed that yak hair was used to make the hair on his face. And when he inquired about it, his makeup artist threw him a surprise. The former WWE champion said, “The beard hair, I’ve got to mention this, this is crazy. The beard wasn’t lace so it had to be put on strips cut in tri, quarter inch wide, piece-by-piece.”

“So I asked my Italian designer, ‘Matteo, what is this?’ And he goes, ‘Oh it’s the hair from a yak. It’s very expensive and very fine hair.’ And I said, ‘Yak?’ And he says, ‘Yes, yak.’ And he’s putting it on my face like this [rubs the area around his mouth] and I say, ‘What part?’ And he goes, ‘The testicles.’

Although it was not an ideal situation, Dwayne Johnson was so dedicated to making this movie that he shot the entire thing while sporting yak pubic hair on his face.

How much money did Dwayne Johnson make from Hercules?

Dwayne Johnson played the title role in the action-adventure fantasy movie “Hercules,” which was released in 2014. Bret Ratner was the film’s director. It is based on the limited series “The Thracian Wars” from Steve Moore’s graphic novel “Hercules.”

Hercules brought in $72.7 million in the US and Canada, $172.1 million in other countries, and $244.8 million globally. Hercules opened in 3,595 cinemas across the country on July 25, 2014. It came in second at the box office to fellow newcomer Lucy ($44 million) after earning $11 million on opening day and $29 million over the course of its opening weekend.

It was “not a particularly strong start” for Hercules, according to Ray Subers of Box Office Mojo, considering “actor Dwayne ‘The Rock’ Johnson’s The Scorpion King’s opening to $36 million” in 2002.

Although the amount of money Dwayne earned from the movie was not made public. The movie received the rating of ordinary performance. Critics gave Hercules a variety of ratings, but overall, they agreed that it was a nice surprise.