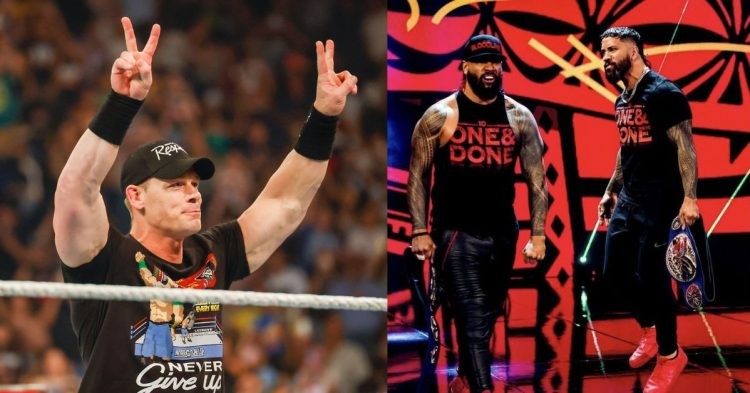 The 16-time World Champion John Cena shared a TikTok video in which Cena is casually greeting and chatting with Jimmy Uso, breaking kayfabe in the process.

John Cena is undoubtedly one of the most iconic WWE stars of all time. On and off the screen, Cena has been seen embodying his character. Yet, he failed to stay in character during his recent SmackDown backstage.

The Face who runs the Place shared a TikTok video in which he can be seen chilling out together with Kofi Kingston and Xavier Woods, followed by Jimmy Uso of the Bloodline. Cena is seen friendly greeting and chatting with Jimmy Uso, breaking his on-screen character.

Cena and Kevin Owens teamed together to defeat Roman Reigns and Sami Zayn. It was his first match of the year 2022. Cena is expected to appear at WrestleMania this year, and WWE has planned a big match for him.

Austin Theory, LA Knight, and Logan Paul were proposed for a match against the GOAT. According to rumors, WWE plans to move forward with Logan Paul since he is a considerably greater draw than the two superstars. The match, however, is in jeopardy due to Logan being accused of a crypto scam and recovering from a knee injury.

Fans are wondering if Jimmy Uso will betray the Tribal Chief, Roman Reigns after he was caught hanging out with John Cena. To be honest, it is extremely unlikely to happen.

It has been speculated that Jey Uso will betray Roman Reigns and depart from the bloodline. Jey had a great feud with Roman and put up a fantastic match inside the Hell in Cell.

In the past few months, Jey hasn’t been very ‘Ucey’ and has gone against the will of the Tribal Chief. On an episode of SmackDown when Sami, The Tribal Chief said they want peace. The WWE universe was shocked probably not more than Roman Reigns when Jey said “I don’t give a damn what the Tribal Chief says”.

Although the situation was calmed down when Sami made The Usos and Roman Reigns break character and chuckle after saying that Jey hasn’t been very ‘Ucey’.

Fans believe Jey might betray Roman in order to take vengeance for the beating he received. Jey is still devastated by the events of the past. With Solo Sikoa on their side, the Usos may be able to turn against Reigns and join forces with the true tribal chief, Dwayne “The Rock” Johnson.

The Rock is said to be appearing at WrestleMania this year, where he will face Roman Reigns. Despite the fact that Pro-Wrestling is full of unexpected moments, fans are hooked on the Bloodline and the entire storyline, which is the most significant plot in the promotion right now.