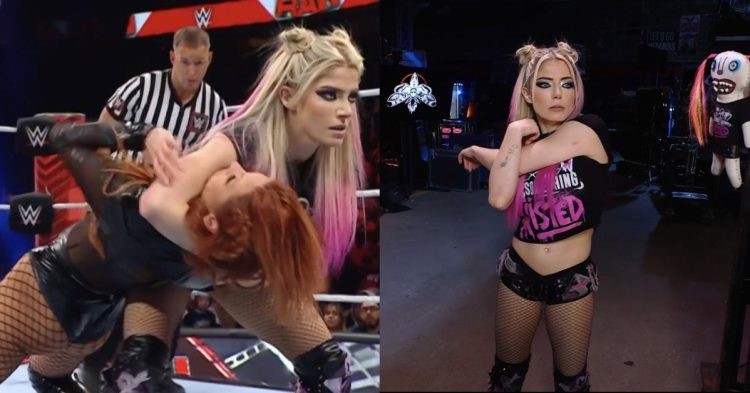 On the most recent episode of Monday Night RAW, Alexa Bliss stunned the WWE Universe by using Bray Wyatt’s finishing move, “Sister Abigail.” The Goddess has shocked the WWE Universe and has teased a major character change coming for her.

The winners of two triple-threat matches that were announced on the event would compete against one another the next week in a #1 contender’s match for the RAW Women’s Championship and go up against Bianca Belair, dubbed “The EST of WWE.”

In a Triple Threat Match, Bayley defeated Asuka and Rhea Ripley, and Alexa Bliss was slated to face Becky Lynch and Nikki Cross. Alexa won due to the interference by Iyo Sky and Dakota Kai and will go on to face Bayley on Raw the next week.

The fans gasped when they saw Alexa use “Sister Abigail,” a classic Bray Wyatt finisher, on Becky even though the match was going well. The Wyatt-Bliss reunion has been hinted at by WWE for a while, but this particular instance has been the most overt indication yet.

This week, Lilly was seen backstage with Bliss in addition to using Sister Abigail. She may sooner than fans thought return to her darker persona and align with Bray Wyatt.

Following Survivor Series: WarGames, WWE announced two Triple Threat matches to decide who would challenge Bianca for the RAW Women’s Championship the following week. Bayley vs Asuka vs Rhea Ripley was the first and Becky vs Bliss vs Nikki Cross was the second match for the night.

Bayley managed to emerge victorious pinning Asuka after the match Rhea was furious and attacked Asuka. Alexa Bliss pinned Nikki Cross after connecting a Twisted Bliss after Dakota Kai and Iyo Sky interfered in the match to beat Becky Lynch. They will now compete in a #1 Contender match on the following week’s episode of Raw to decide who will challenge Bianca for her Raw Women’s Championship.

After hints that she might be making an alliance with Bray Wyatt, fans are eager to watch Bliss take on Bayley. Fans have been waiting for Bliss to turn heel and bring back her darker gimmick back. WWE has done a fantastic job thus far of keeping the WWE universe interested in the storyline. And fans are hoping WWE can take advantage of the hype that has been built.