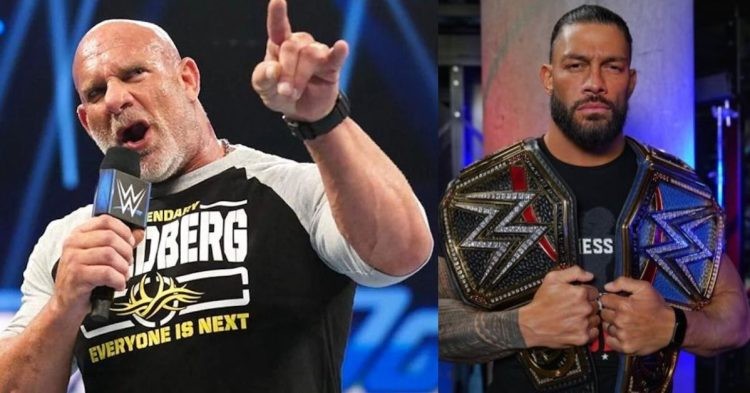 Roman Reigns has been the most dominant superstar in WWE since winning the WWE Universal Title in August 2020. He has been booked as an unstoppable force and hasn’t been pinned by any superstar for the last 18 months. At some point, The Tribal Chief will need to lose his title to another talent, but WWE Creative must make sure the opportunity is not lost.

Roman Reigns has hit 1000 Days without being pinned. What an incredible milestone. https://t.co/I097ZslS9c pic.twitter.com/Qj43gWjdm5

WWE Hall of Famer Goldberg recently made an appearance on The Bump, and he thinks there is only one man capable of pinning the Tribal Chief. According to Goldberg, Brock Lesnar might beat Reigns if given the opportunity to face the Roman one-on-one. He said, “I think Brock has the opportunity to [beat Roman Reigns] when he comes back. I think there are a number of people on the card right now on both shows that have the potential to beat him. But everything has got to fall into place. He’s very dominant. We’ve seen that over the past year. It will take a special person to come out and dethrone him.”

Reigns pose a threat, and have already encountered him in his capacity as The Tribal Chief, Goldberg remarked that whoever does conquer him must be smart. He added, “defeating roman gotta be the right time, the right place, and has to be one-on-one. That’s tough because nowadays with the Usos, I mean, he’s got a built-in bodyguard system working out pretty well for him.” It was made apparent by WWE’s tagline for SummerSlam that Brock Lesnar and Roman Reigns match would be their last. In order to get the two men back in the ring together, according to Goldberg, WWE will have to come up with a unique plan.

3 Superstars who could dethrone Roman Reigns

While WWE currently trying its best to portray Roman as the unstoppable force, here are 3 Superstars who could end Roman’s reign.

Roman and McIntyre went to war with each other at the WWE Clash at the Castle in the UK. The majority of the WWE Universe believed that McIntyre would prevail in front of the UK crowd. Although the end was unexpected and NXT superstar Solo Sikoa interfered and assisted his cousin Reigns in keeping the championship. Because Drew McIntyre didn’t suffer a clean defeat at WWE Clash at the Castle, the possibility exists of a future encounter between Roman Reigns and Drew McIntyre in which The Scottish Warrior might defeat The Tribal Chief.

This is it. Thank you all for being with me on this journey. Cardiff, bring the noise. Let's make history! #WWECastle pic.twitter.com/7KClQL3Tqf

At WWE Royal Rumble 2022 earlier this year, Reigns faced off against Seth Rollins to defend his Universal Championship. Rollins did all in his power to manipulate his former Shield brother. As a result, Reigns lost his temper and violently beat Seth with a chair, disqualifying himself from the match. Due to their extensive history together, Rollins would be one of the top contenders to defeat Roman Reigns as the next WWE Universal Champion if he turned babyface.

“The American Nightmare” Cody Rhodes returned to the company earlier this year at WrestleMania when he quickly became involved in a feud with Seth Rollins. He is already widely regarded as the favorite to win the Royal Rumble in the upcoming year. If that occurs, we might witness a Roman Reigns vs. Cody Rhodes WrestleMania match in which Roman is eventually defeated.