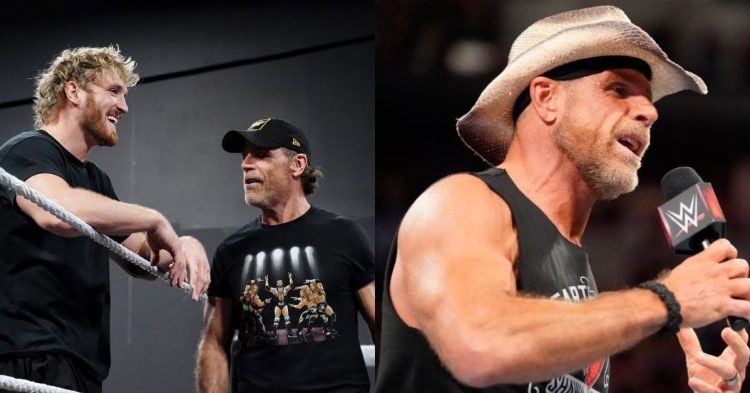 At Crown Jewel, Logan Paul will compete in the biggest bout of his WWE career. For The Tribal Chief’s Undisputed WWE Universal Championship, he will face off against him. The YouTuber lately seemed to be working out with Shawn Michaels in preparation for the major event.

The iconic Godfather of wrestling, @ShawnMichaels, on tomorrow’s episode of @IMPAULSIVE 🤼‍♂️ pic.twitter.com/7uj11b8ZCz

This week, WWE announced that Logan Paul has been practicing in the ring with Shawn Michaels in order to challenge Roman Reigns for the Undisputed WWE Universal championship at Crown Jewel. Shawn Michaels discussed working with Paul as he enters year one of his WWE career in a conference call with the media on October 21 to promote tomorrow’s NXT Halloween Havoc show.

Shawn Michaels appeared on Logan Paul’s podcast ImPaulsive, Shawn talks about why he thinks Paul needs to work on his mic skills. Recently Logan appeared on Smackdown and cut a promo on Roman Reigns. While delivering the promo, Logan said something very funny.

While mocking The head of the table, Logan said. “I am the table”. This was widely criticized and even the wrestling legend HBK made jokes about it saying, “In this business, you do understand what happens to the table at the end, right?”. HBK suggested Logan work on his mic skills as well and also agreed to help with it.

During a conversation with Ryan Satin, Logan Paul talked about his impending contest with Roman Reigns for the WWE Undisputed Universal Championship at the Crown Jewel PLE.

“These people are real-life superheroes … and to think I could potentially become that excites me!” @loganpaul opens up about becoming a #WWE Superstar and what his intentions are in my latest one-on-interview.

Logan Paul said, “The physicality comes easy. Truly, what I need to work on are my mic skills. I’m not comfortable on the mic. I’ll be on the mic at a show, Madison Square Garden, with 18,000 people watching, all heckling me live and talking their smack while I’m trying to deliver a story. It’s very difficult.”

“Doing WWE promos is one of the hardest things I’ve had to do and I have so much respect for the superstars who get in there every Monday and Friday and rattle off this stuff to perfection. I’m just not there yet. The physicality, let’s go.”

Delivering a strong promo requires time and a lot of effort, as any veteran of the WWE would attest. Logan Paul is only 27 years old, and if he keeps doing what he’s doing, he’ll only get better over time. And Roman Reigns is living proof of how much better time and practice can make you.