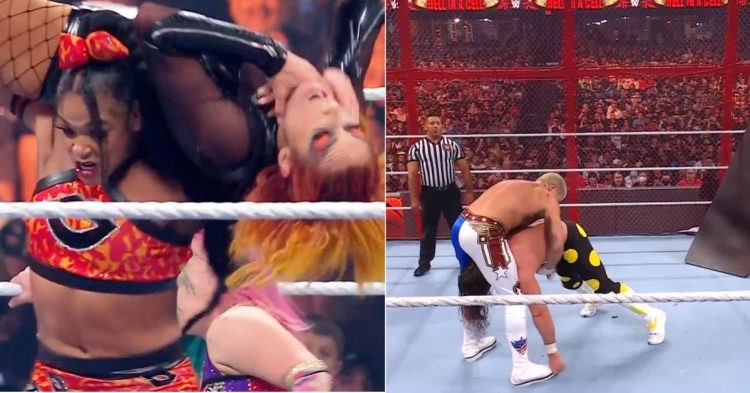 The WWE Hell in a Cell premium live event was the first major show that did not feature Roman Reigns. With seven matches on the card, the show had its good and bad bits. The show aired live from The Allstate Arena in Rosemont, Illinois, and had only two championships on the line.

There was only one match with the Hell in a Cell stipulation. The lack of star power was compensated by a couple of good matches. Let us take a look at the highlights of the show.

The first match of the night was perhaps one of WWE’s best matches in 2022. The Trip for the RAW Women’s Championship was a well-balanced showing of all three superstars. But, it was Bianca Belair who’d claim the victory.

The next match was Omos vs. Bobby Lashley. The Nigerian Giant tried to take control during the match, but Lashley was making it difficult to do so. There was interference from Cedric Alexander on behalf of The Almighty. But, he was quickly dismissed by Omos.

Kevin Owens, on the other hand, defeated Ezekiel with a stunner. Judgement Day also claimed victory after Edge hit Finn Balor with a spear as Judgment Day continues its dominance. The Madcap Moss vs. Happy Corbin match with No Holds Barred stipulation was a brawl from the moment the match started. Madcap won the match in a match that had great spots.

The United States Championship match between Mustafa Ali and Theory started with great takedowns and counters. Theory won the match in a match that displayed energetic performance from both superstars. The main event of the match saw an injured Cody Rhodes take on Seth Rollins. Both superstars stepped into the cell to conclude their rivalry.

WWE announced that Rhodes had torn his pectoral muscle during the pre-show while training. It was incorporated into the story. Rollins kept trying to hit him on the chest. Both men traded moves and weapons. But in the end, Cody Rhodes managed to pick up the victory.

Becky Lynch claims to have been robbed

Becky Lynch lost yet another championship match since, and is understandably upset over what transpired at Hell in a Cell. In what was probably the best match of the evening, Lynch was just a whisker away from winning the RAW Women’s Championship. But Bianca Belair dumped her out of the ring to pin Asuka and steal the win.

This defeat was another big setback for Becky Lynch, who has been on a downward spiral since her loss at WrestleMania 38. The way the match ended, it seems likely that Becky Lynch’s pursuit of reclaiming her championship isn’t over yet. She might continue her rivalry with Bianca Belair.

The main event of the Hell in a Cell premium live event didn’t disappoint the fans. It was a gutsy performance from Cody Rhodes to have come out with an injury to perform in front of the live crowd. Rollins, as usual, didn’t miss a beat when it came to playing mind games.

Rollins came out as his music started playing, wearing a polka dot attire. It was an attempt to get into the American Nightmare’s head since these polka dots were made famous by his father, the American Dream Dusty Rhodes. Cody Rhodes went on to wrestle with an injury but is likely to take time off to nurse his pectoral muscle tear.

What were your thoughts on the Hell in a Cell premium live event? Drop your comments below.