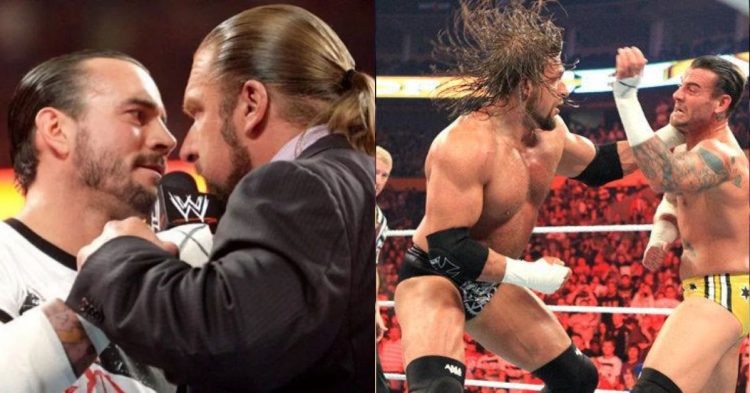 The rivalry between Triple H and CM Punk (Credits: WWE)

There’s no denying the tension that has existed—and perhaps still does—between Triple H and CM Punk over the years. Issues started to arise from Punk’s early days in the WWE until his departure. However, how did it all begin?

Since 2005, there have been problems between The Game and The Best in the World. When he referred to Triple H as the “CM Punk of WWE,” CM Punk became a favorite among fans of indie wrestling. In addition, Punk was linked to Triple H because of the Pepsi Plunge finisher that the punk used. In short, the move was a pedigree off the top rope. Triple H did not acknowledge the similarities too much.

According to Bruce Prichard, the DX members wanted to bury Punk. Triple H and Shawn Michaels were not pleased when Punk first joined WWE and had a dark match and made their feelings known.

In 2011, Punk and HHH were involved in a storyline and engaged in an on-screen feud. During his famous Pipebomb promo, Punk again made fun of Triple H. Later, they squared off at Night of Champions, where Triple H prevailed by allegedly using his influence behind the scenes to stop Punk’s surge. Many people think that incident intensified their animosity and caused CM Punk to quit the WWE.

Was the CM Punk Pipebomb scripted?

On Monday Night Raw on June 27, 2011, CM Punk delivered a legendary promo that reflected many fans’ complaints about the WWE and Vince McMahon. Recently, CM Punk disclosed a condition Vince McMahon made for the promo, revealing how much of his iconic WWE “pipe bomb” was improvised.

In an interview with SPORT1 Wrestling, Punk said that, in advance of the June 27, 2011, broadcast of Raw, he wrote an outline of the promo for McMahon. The former WWE Champion acknowledged that he did not say everything that was stated in the plan, but countered that it was simpler to ask for an apology than to get approval on live television.

Punk said “All of it (came from him personally). I had to make an outline for Vince and I didn’t say anything I wrote in the outline, I just know that I needed him to agree and then I went out there and said whatever I wanted. I knew what I wanted to say, I knew I wasn’t stepping over the line and I knew nobody was going to be pissed at me.”

On the Ariel Helwani Show, former WWE writer Brian Gewirtz also shed some light on the matter. He disclosed how much of the promo was scripted during it. “Punk brought so many elements of that to himself, in terms of sitting down as opposed to standing. I know he worked with Ed Koskey on it. But I believe that the vast majority of it was coming from Punk’s heart and his brain.”

The Pipebomb promo catapulted CM Punk’s career to new heights and overnight popularity. Wearing a Stone Cold t-shirt, Punk made it known how he felt about the management.