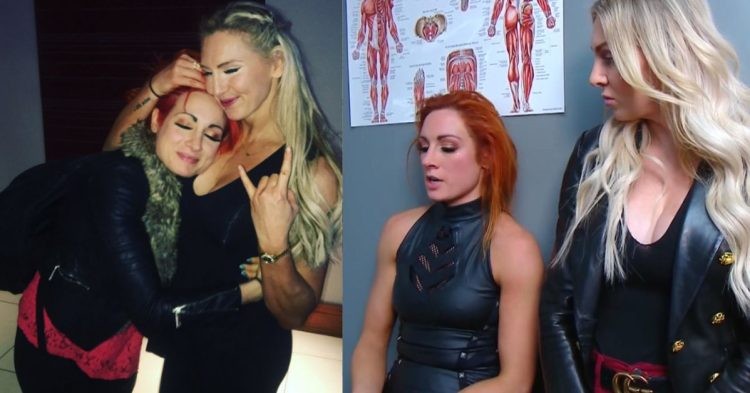 Becky Lynch and Charlotte Flair had a near death experience (Credits: Superluchas)

Becky Lynch was asked on That’s What She Said what the scariest scenario she has ever been in was. Lynch revealed that she nearly died in a car accident while traveling with Charlotte Flair between live events.

Becky talking about the time she was driving between shows and her and Charlotte got into an car crash. pic.twitter.com/HE2gBVm6JV

“It’s probably when I nearly died. So, it was actually me and Charlotte who were driving from one live event to another and we were on the road. We’re in Detroit and two cars go racing past us and I go ‘Holy c–p that car nearly… boom!’ We get sideswiped and rammed right into a wall, then we go skidding past that. I look over to Charlotte and she’s just covered in red stuff – turns out it was my meal from the back of the car – but I thought it was blood.”

Becky Lynch and Charlotte Flair are not friends anymore some can say they are rivals on and off screen now, but it is no secret that they were once best friends. They used to travel together for WWE events during this time.

Charlotte Flair and Becky Lynch used to be best friends. However, for a number of reasons, their relationship began to crumble. Lynch and Flair were members of the stable “the Four Horsewomen” in NXT, alongside Sasha Banks and Bayley. Both women debuted on the main roster in 2015 after dominating NXT and the rest is history.

Becky Lynch and Charlotte Flair are no longer friends. Their on-screen rivalry, however, became so real that it negatively affected their real-life relationship. Becky Lynch’s ex-boyfriend Jeff Dye recalled the roots of their feud on the Wrestling With Freddie Podcast.

Jeff Dye said “Charlotte had a difficult time that Becky was starting to become the face of the female wrestling thing. I guess it wasn’t surprising. It didn’t change my perspective, but it was interesting to see how much they genuinely when you’re struggling on the roster, it affects their personal life.”

As per Dye, their real-life beef stemmed from Charlotte’s jealousy of Becky. Their unhealthy competitive attitude appears to have ended their friendship. Aside from that, don’t forget that Ric Flair sued WWE in 2019 for giving “The Man” gimmick to Becky Lynch. While this may not have been the primary cause of Lynch’s feud with Flair, it may have struck a nerve.