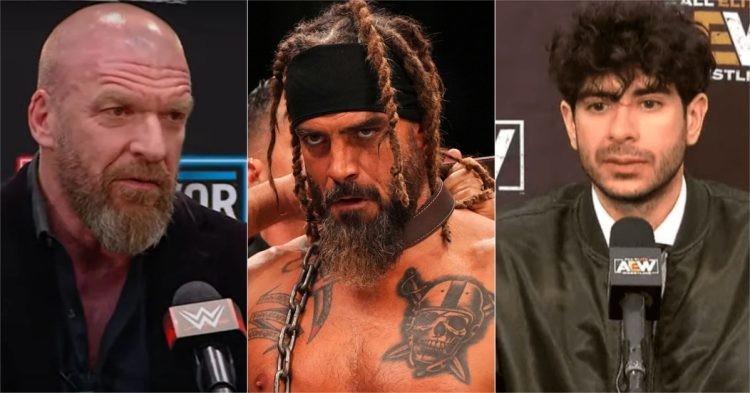 The world of Pro Wrestling suffers a tragedy as Jay Briscoe passes away. The Ring of Honor stalwart was holding the tag titles for the promotion along with his tag partner and real-life brother Mark Briscoe. The AEW head honcho Tony Khan was the first to break the sad news to the world. He took to Twitter to let the fans know that Jay had passed away at the age of 38.

Jay Briscoe is perhaps one of the best wrestlers to never compete in WWE. From Ring of Honor (ROH) to New Japan Pro Wrestling (NJPW), Jay left his footprint all over the indie wrestling scenes. Aside from being a 13-time ROH tag champion with his brother Mark, Jay also had stints as a singles star at Premier Wrestling Federation (PWF), and ROH as well.

It is with a heavy heart that we mourn the tragic passing of Jamin Pugh, known to wrestling fans around the world as Jay Briscoe. Our thoughts are with his family, his friends, and his fans. pic.twitter.com/5wB6HpVY0x

He has won countless amounts of championships all over the world. Jay Briscoe was in the middle of a great run in ROH. However, his untimely passing puts an end to an amazing career that will be remembered by hardcore wrestling fans for a long time to come! But how did Jay die? According to reports, Jay died in a car accident. Apparently, there were four people involved in the crash, two dead and the others in critical condition.

Tributes pour in from the pro wrestling community for Jay Briscoe

To say that the pro-wrestling community is in shock after the news would be an understatement. Not only was Jay Briscoe a solid performer inside the square circle, but he was also an amazing human being with friends all over the industry. From WWE authority figure Triple H aka Paul Levesque to AEW commentator Taz, friends and colleagues from all over the world sent their condolences to the Briscoe family.

Here are some tweets on the matter

Heard this tragic news while flying. I’m DEVASTATED that Jay Briscoe (Jamin Pugh) tragically died today. I was honored to work with him many times. I loved Jay. Jay was SO real. Jay loved his wife & kids more than anything & we shared that bond. I’m heartbroken for his family. pic.twitter.com/c2Jki7dEp0

An incredible performer who created a deep connection with wrestling fans across the globe. My condolences to the family and friends of Jay Briscoe.

I don’t have the words right now to properly convey my sorrow. I love Jay & Mark Briscoe. Always have. I wouldn’t be here without them. I’m very lucky to have shared the ring & shared so many laughs with Jay Briscoe and I’m so sad to know neither will happen again. RIP my friend.

Just like everyone else, I'm heartbroken to learn of Jay Briscoe's passing. I've always enjoyed sharing a locker room with he & his brother Mark. Incredibly kind & respectful. Sending all my love to Mark & their family.🙏 #ripjaybriscoe pic.twitter.com/s8jbcDh0AO

I've known Jay Briscoe since he was a fan
Watched him become an amazing wrestler, best tag team & realest promo guy
I was going to text him yesterday about the cost of eggs and I didnt
I wish I did
Whenever I saw them I'd say
Luv me some Briscoes
Prayers for his family pic.twitter.com/aTaQRTjilX

Sadly, Jamin Pugh has passed away. Known to fans as Jay Briscoe, he was a star in ROH for over 20 years, from the first show until today.
Jay and his brother Mark dominated ROH, reigning as champions to this day. We'll do whatever we can to support his family.
Rest In Peace Jamin

I cannot even begin to process this right now. I loved everything about my friend Jay Briscoe. His passion. His drive. His presence. Our wars in the ring. Most importantly, how much he loved his family. I am literally sick to my stomach… pic.twitter.com/XNK5ZHlqxu

Jay Briscoe, real name Jamin Pugh, was born on January 25, 1984. Although Jay Briscoe was a tough character on Television, Jamin was not the same as his on-screen persona. Although he was involved in a controversy on Twitter regarding his views on same-sex marriage in 2013, he subsequently apologized for the incident.

As wrestling fans know, AEW owns Ring of Honor. With an AEW Dynamite episode coming up soon, fans would be eager to see how the company and Tony Khan handle the situation. His death also throws a wrench in the booking plans for the immediate future. But, it seems almost inconsequential in the scheme of things. Fans can expect a beautiful tribute for the recently deceased wrestler.