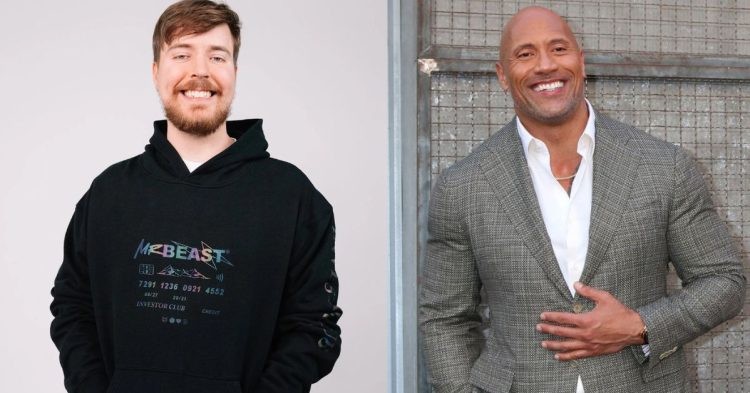 Is Mr.Beast Taller than Dwayne "The Rock" Johnson? (Credits: Twitter)

In a Youtube video posted by Mr.Beast, he challenged The Rock to a Rock, Paper, and Scissors game. Fans were surprised to see Mr.Beast’s height and were questioning how tall Mr.Beast actually is and whether he is taller than The Rock.

MrBeast, a YouTube star and content creator with over 100 million followers, invited The Rock to a game of Rock, Paper, Scissors outside the premiere of his recent movie Black Adam. The YouTuber even spiced things by donating $100,000 to a charity of The Rock’s choice if he lost.

Although fans appreciated the whole thing few eagle-eyed fans were quick to notice the height difference between the two stars. Surprisingly Mr.Beast and Dwayne have almost the same height. According to some reports Mr.Beast is 6 feet 3 inches tall but it is not confirmed from his side. Dwayne on the other hand once told his fans that he is about 6 feet 4 inches tall.

The height difference is almost an inch and you can see him a bit shorter than the Great One. But few have claimed that The Rock has lied about his height and is not actually 6’4″. If Mr.Beast is actually 6’3″, the video is enough to prove how tall Dwayne Johnson actually is.

Did The Rock lie about his height?

According to certain accounts, The Former WWE Champion wore shoe lifts as a wrestler to give the idea that he was enormous enough to intimidate opponents who were taller than him. The Rock has claimed that he stands 6’4″ tall.

Mr.Beast invited Dwayne “The Rock” Johnson to a game of Rock, Paper, Scissors during the premiere of his Black Adam film. In fact, Mr. Beast added a fancy twist. If Dwayne Johnson beats him, the YouTube sensation will donate $100,000 to a charity of Dwayne Johnson’s choice.

The first and second rounds were a tie. The Rock adds before the third round that “And if you win, I will match that and donate $100,000 dollars to any charity you want.”

Johnson picked Rock this time, but Mr.Beast won as he chose paper. The Rock then decided to donate the money to the Make-A-Wish Foundation. MrBeast joined him. “If it makes you feel better, I’ll still donate 100k as well,”

Mr. Beast and Dwayne Johnson ultimately donated $200,000 to Make-a-Wish Foundation. The fans loved their interaction and asked them to collaborate on a video. The collab could be amazing, starting the biggest YouTube Star alongside the biggest Hollywood Actor.