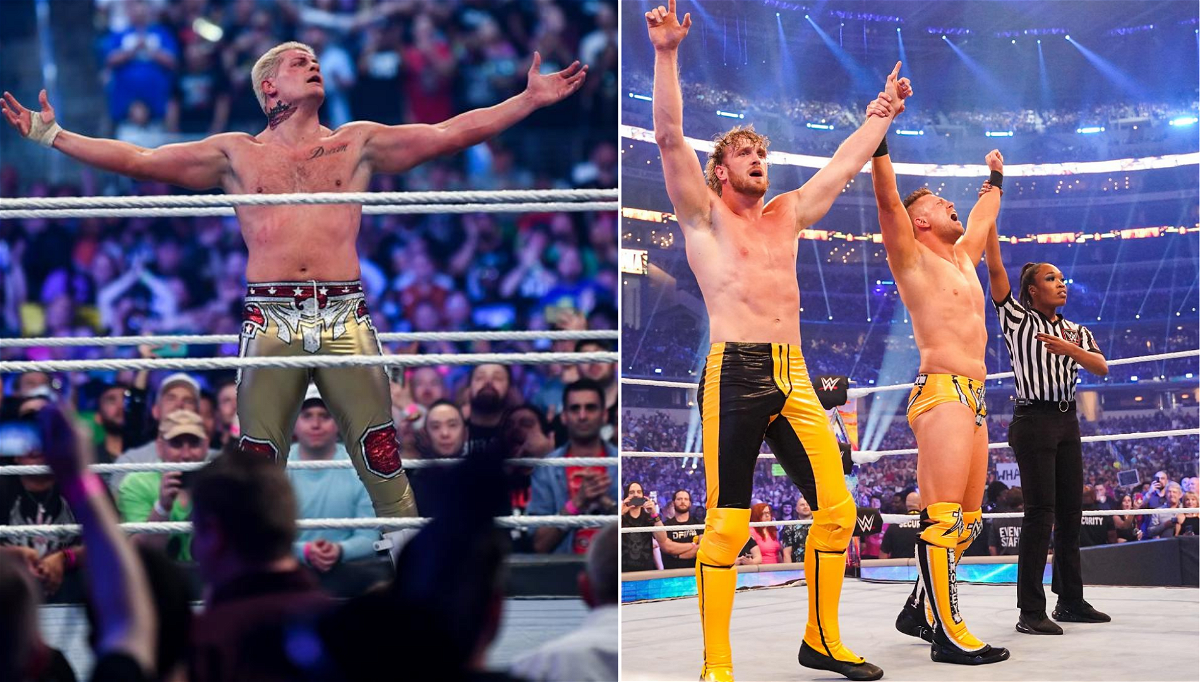 WWE proved last night that when they do something right, they knock it out of the park and into the stratosphere. WrestleMania 38 Night 1 was a fantastic show, stacked to the brim with great showmanship, better matches, and some of the Best WrestleMania Moments of All Time. Let’s take a look at the Top 5!

One WrestleMania Moment wasn’t even for The Scottish Psychopath; he went ahead and created 3! Drew McIntyre vs Happy Corbin had to be the match with the least hype around it, and it over-delivered on our expectations. The storyline going into ‘Mania- the entire feud, in fact- can be justified as a good thing thanks to Drew’s performance tonight. He executed a picture-perfect suicide dive.

Became the First Person to Kick Out of Corbin’s Finisher.

And tied it all up in a neat package by CUTTING THE RING ROPES with an assist from Angela!

This was the 2nd match of the night, and it perfectly embodied just what kind of an event WrestleMania 38 was going to be; a car crash of the most-stupendous moments in Modern Era WWE.

The WWE Universe broke character today and acknowledged someone that wasn’t Roman Reigns. Logan Paul has been the most-effective heat magnet in WWE since the peak of the Mr. McMahon character. But last night, he gained the respect of every person in the AT&T Stadium. The Maverick is a friggin’ natural at Sports Entertainment. To the point, where he was busting out a 3 Amigos on Rey Mysterio!

He even nailed the Master of the 619 with a massive Frog Splash, a-la Latino Heat.

The post-match angle saw The Miz deliver a Skull Crushing Finale to his tag-team partner, setting up a program between the two that extends back to Paul’s first few WWE appearances. If things keep going like this, we wouldn’t be surprised to see Logan Paul on our TV screens as a full-time WWE Superstar. If his performance last night is anything to go by, there are great things in his future.

3. Bianca Belair proves why she is the best in WWE at WrestleMania 38 Night 1

This match should have been the main event, and I will stand by that statement till I die. Bianca Belair and Becky Lynch absolutely tore the house down last night with one of the best Women’s Matches in WWE History. Both women got special entrances, which already made their contest feel like the main event.

And then the match itself was a spectacle of brutal vindictiveness mixed with beautiful professional wrestling. Becky Lynch countering a KOD into a Manhandle Slam. Bianca hitting a 450 Splash in desperation. The pacing, the action, everything was perfect; especially the result, that saw Belair prove herself as the EST of WWE, 2 years in a row!

The Texas Rattlesnake did what he said he was going to do (find out what, here). 19 years after having his career cut short by injuries, “Stone Cold” Steve Austin competed in his final, official WWE match-up; and it was a moment charged with emotion. Austin and Owens had a fairly basic brawl, breaking out their biggest hits keeping in line with Steve’s advanced age.

But man, Stone Cold can still put on a damn show! Even if his suplexes don’t look that great anymore.

He still has the Best Stunner in the Game, and he is still the Baddest S.O.B in the WWE.

Thank you for One Last Can, Stone Cold. We loved it, but it wasn’t our Top WrestleMania 38 Night 1 moment. That honor has to go to…

1. Cody Rhodes makes his emotional return to WWE after 6 years at WrestleMania 38 Night 1

There aren’t a lot of moments in Sports Entertainment history that give you goosebumps, but this was definitely one of them. Cody Rhodes took a chance on himself 6 years ago when he left WWE. He returned last night with his legacy intact.

The American Nightmare was revealed as Seth Rollins‘ Mystery Opponent, and the AT&T Stadium lost their absolute minds.

Rhodes went on to have the match of the night with The Visionary, wrestling a more independent style than a traditional WWE match.

His victory will usher in an excite new era for Sports Entertainment; one that will wipe out Stardust from existence and replace him with The American Nightmare. WrestleMania Main Eventer. WWE Megastar. And Future World Champion.