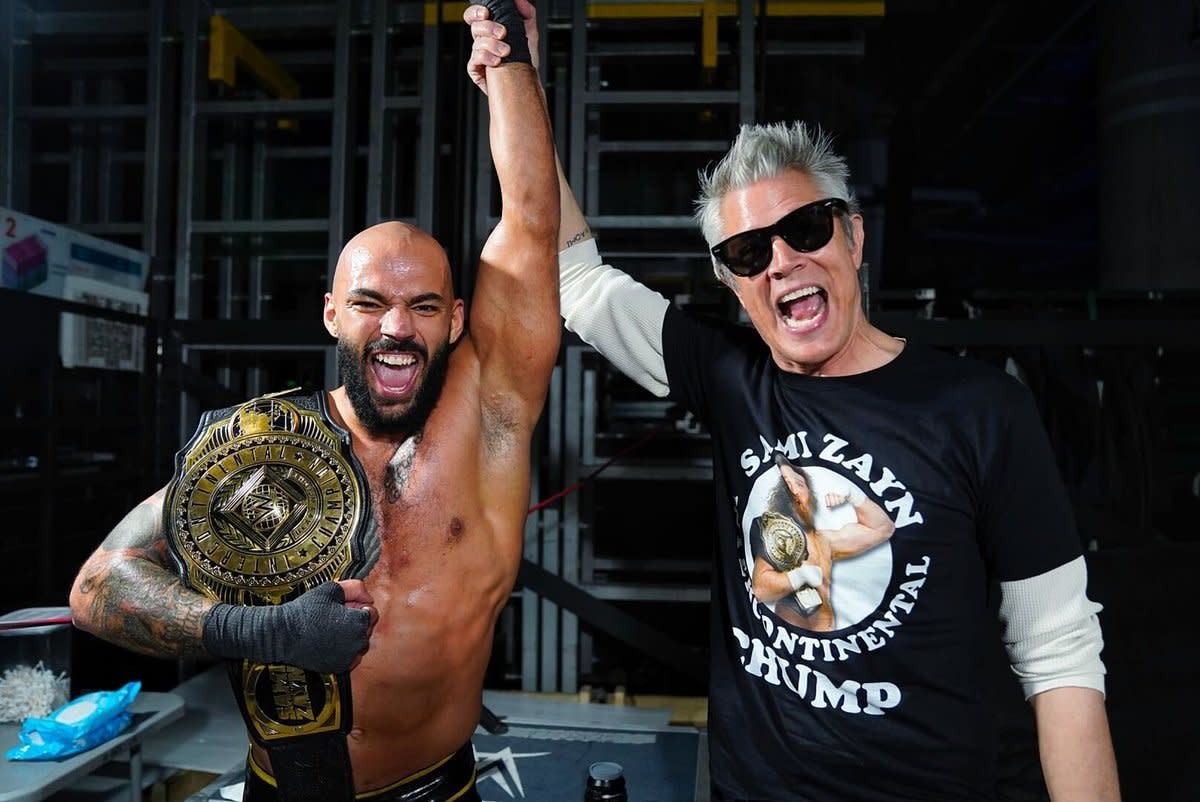 Friday nights are always a treat for the fans of professional wrestling. We get WWE SmackDown and AEW Rampage back to back. Both shows were newsworthy. We will look at AEW Rampage a little later but let’s look at the 5 big takeaways from last night’s SmackDown. Title changes, multiple WrestleMania matches were made official and we also had a small tease to a potential feud heading into WrestleMania.

Potential match for the Tag Team Titles at WrestleMania

Last night on Smackdown, the Tribal Chief cut a promo in the middle of the ring. He talked about defending the title at MSG tonight in the ‘Road to WrestleMania‘ Live Event and that Brock Lesnar will also be defending his WWE title in the same event. Moments before that segment, the Smackdown Tag Team Champions jumped on Rick Boogs and the former Intercontinental Champion, Shinsuke Nakamura. The champs gave them a brutal beat down.

After a triumphant effort in her first match on SmackDown, Ronda Rousey called Charlotte Flair into the ring. She swiftly took down Charlotte. Rousey locked in the Ankle-Lock and Charlotte tapped out. Although it was not an official match, we could have just witnessed the potential finish to their match at WrestleMania.

She’s got more than an armbar, @MsCharlotteWWE! #SmackDown @RondaRousey pic.twitter.com/7OhDnnnN5y

Sami Zayn put his title on the line against Ricochet on SmackDown this week. From the moment the bell rang, Ricochet had the upper hand. Multiple roll-ups and schoolboys but Zayn managed to thrive. The match did not last long and in that short time, Ricochet had the opportunity to showcase his insane athleticism.

Sami Zayn had just started to get the upper hand, but that did not last too long. Johnny Knoxville showed up and that distracted Sami Zayn. It allowed Ricochet to capitalise and he hit a Dragon Rana and pinned Zayn to become the new Intercontinental Champion. This is great news! Finn Balor won the United States title on Raw earlier this week and now Ricochet wins the Intercontinental Title. It did not look like both stars would be even competing in a match at WrestleMania. Now both could be defending their titles on the Grand Stage.

Honestly if you’re not happy with Ricochet and Finn Balor as the midcard champions heading into Wrestlemania, I really don’t know what to say to you ???? #Smackdown pic.twitter.com/SDK0B4C6x5

.@realjknoxville will look to make a “Jackass” out of @SamiZayn when the two bitter adversaries clash on #WrestleMania Sunday! https://t.co/gMQd3FMj3u pic.twitter.com/6GaEviKSwb

On Wednesday, Vince McMahon was a special guest on the Pat McAfee Show. The Chairman of WWE offered Pat McAfee an opportunity to compete at WrestleMania 38. On SmackDown, Austin Theory showed up and revealed that he is the opponent for Pat McAfee and slapped him and left.

Pat McAfee was beyond pissed and was asking Theory to come back and do it again. The match was then confirmed by WWE later. We have already seen Pat do an amazing job inside the ring on NXT. So everyone is excited to see Pat enter the ring once more.

.@PatMcAfeeShow will return to the squared circle at #WrestleMania 38 in a battle against @austintheory1! https://t.co/Fx7ztEnD8M pic.twitter.com/tvRZCN1hG4

These are the 5 big takeaways from Last Night’s SmackDown.

Did you enjoy last night’s episode? What was your favourite moment?