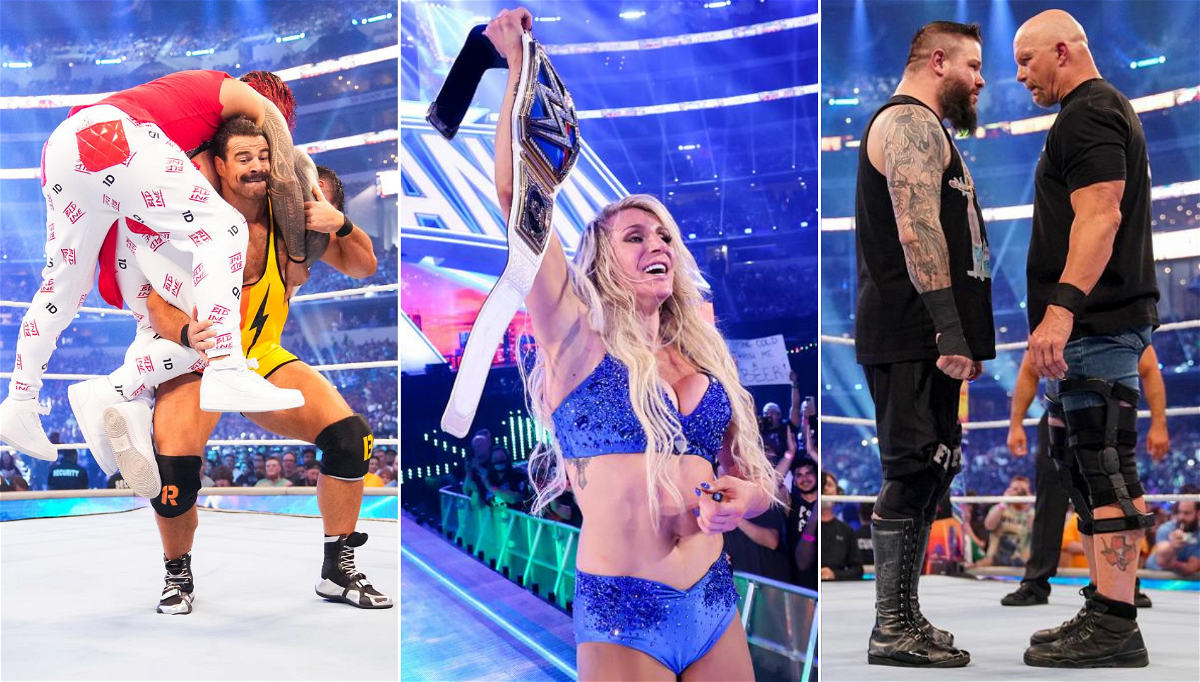 This is Rick Boogs’ first appearance at WrestleMania. Boogs teamed with Shinsuke Nakamura to face The Usos for the SmackDown Tag Team Championship match. It seemed like, the initial plan was for Boogs to show off his strength in a huge way.

Boogs was setting up to carry both the Usos on his shoulders at the same time. Unfortunately the weight seemed too much for Boogs and his knee gave out. Boogs was unable to even stand up after that. This lead to a highly one sided affair as Nakamura could not handle both the Usos. Then the Usos hit the One-D and got the win. Maybe if Boogs was not injured then maybe Shinsuke and Boogs may have become the new Champions.

A bad night for Michael Cole at WrestleMania 38

Last night was one of the worst nights for Michael Cole. Almost every match he was involved in, he messed up 2 or 3 lines. One of the worst lines from Michael Cole came during the McIntyre vs Corbin match. Cole referred to McIntyre’s mom as his wife and then everything from there was down hill. Cole was so bad that he was getting way too excited for random spots while he hardly reacted for ‘OMG‘ moments.

This was overall a good match, but there were several blatant botches that we cannot ignore. Firstly, it was a standing Moonsault from Charlotte, Rousey was meant to roll away I believe, but she was way too late on that and so there was an awkward landing and for the next few seconds no one knew what to do.

There was also another spot where Ronda Rousey was supposed to counter the Figure-8-Leg Lock by grabbing Charlotte’s leg, but Rousey was a little away from Charlotte’s leg so, the Queen had to basically lift her leg and hand it over. It felt weird to see and made absolutely know sense.

This Premium Live Event was set basically to build Rousey to the top. It was expected for Rousey to win the title and have a long title run. But instead, the Queen has defeated Rousey to retain the title. This make no sense. Rousey cannot afford another loss anymore, if she had won the title then getting victories from then on makes sense, but if she is not the champion then we are just going to se Rousey vs Charlotte for the. next several months. It was a horrible decision to let Charlotte win. I guess if Rousey wins at WrestleMania Backlash, then it is fine, but then we will have to have Rousey vs Charlotte for a third time at the next event after BackLash.

Stone Cold Steve Austin’s return was huge. He is back after 19 years for in-ring action. To be honest, this segment could have been just the KO Show where both Austin and Kevin Owens talk trash to each other and then in the end Austin hits a Stunner on Owens to close it off. But instead they had a match and it was below sub-par. Austin was too slow, and of course he would be, the man is 57 years of age. Kevin Owens honestly saved the segment. Honestly , Owens deserves a bonus for this performance.

These are the 5 things that went wrong at WrestleMania 38. What disappointed you the most?