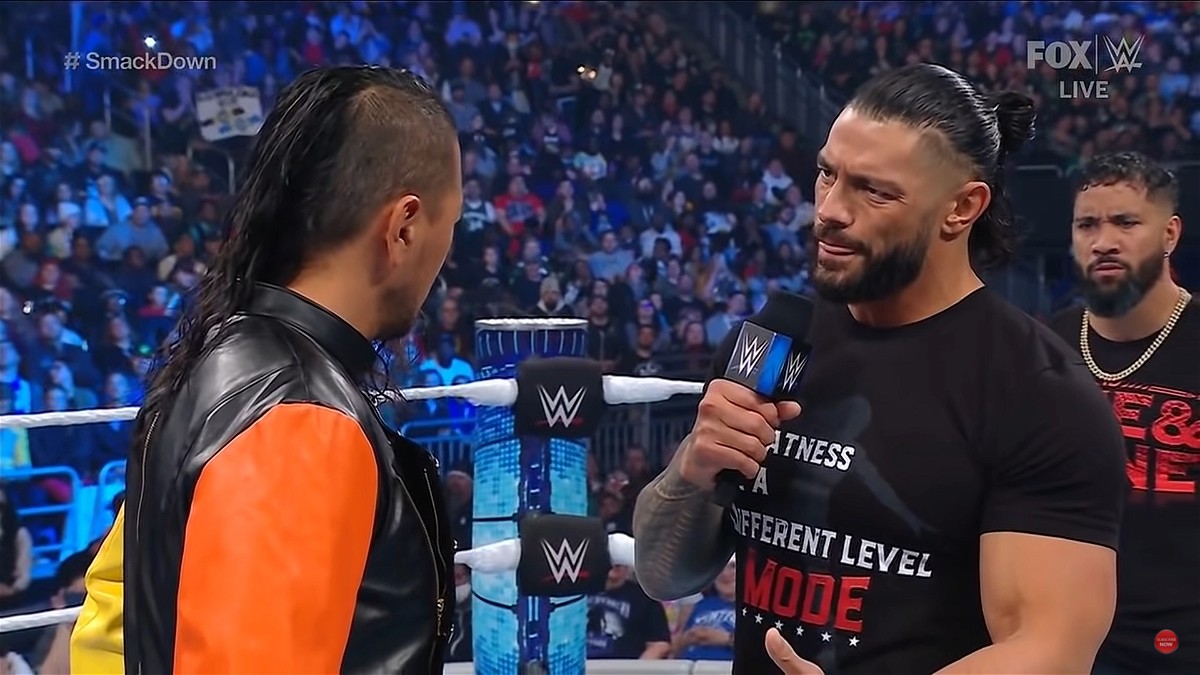 After defeating Brock Lesnar at WrestleMania 38, Roman Reigns promised to announce his next move on this week’s WWE SmackDown. There were a few more segments and matches in line before Reigns could take center stage on SmackDown. Following her WrestleMania defeat at the hands of Charlotte Flair, Ronda Rousey also made an appearance for a promo.

NXT superstars Gunther (with Ludwig Kaiser) and Raquel Gonzalez made their main roster debut as Lacy Evans returned to Smackdown in a promo segment.

Roman Reigns made an appearance on SmackDown this week, with fans anticipating that the segment would be more informative than his post-WrestleMania RAW promo. “The Tribal Chief,” said that The Usos need to unify the tag team belts and pursue RK-Bro on Raw. Unexpectedly, Shinsuke Nakamura took his chance to interrupt Reigns.

When his tag team partner Rick Boogs suffered a serious injury, Nakamura lost to The Usos at WrestleMania. While he may have lost, he appears to be the first to face Roman Reigns for the world title, probably at WrestleMania Backlash.

2. Happy Corbin to start a rivalry with Madcap Moss

The Happy Folks have broken up. Happy Corbin blamed Madcap Moss for his WrestleMania loss to Drew McIntyre. Madcap Moss wasn’t happy with what was going on, so he made a joke about Corbin, effectively ending their alliance. The crowd was supporting Madcap Moss, and they were even chanting his name for the first time since his debut.

Madcap is seen as a future star by WWE, and he will finally emerge from Corbin’s shadow to compete as a singles competitor.

3. Sasha Banks and Naomi to stay as Tag Team champions for a while

On Post-WrestleMania Raw, Rhea Ripley and Liv Morgan were defeated by Sasha Banks and Naomi in a championship contender match. Regardless, they were given a championship opportunity and will fight Banks and Naomi on Raw next week. Morgan made her SmackDown appearance without Ripley and won one of the biggest matches of her career against Sasha Banks. While it was a huge surprise, it was also a subtle hint that The Boss & Glow team will not lose the Tag Team titles on Monday’s RAW.

Ronda Rousey admitted to making Charlotte Flair tap out, but she didn’t complain about the referee not looking; instead, she just stated that she didn’t finish the job when it mattered the most. The promo appeared to be an attempt by WWE to portray Rousey as a strong babyface rather than a bitter heel.

No loopholes. No excuses.@RondaRousey wants @MsCharlotteWWE in an “I Quit” Match at WrestleMania Backlash! #SmackDown pic.twitter.com/O7Boaz9Ehj

The UFC Hall of Famer proposed an “I Quit” match between herself and Flair at WrestleMania Backlash. The champion, however, refused. Rousey confronted Adam Pearce, who promised to respond as soon as possible. Rousey’s ambitions may finally be realized, and WWE did a great job of establishing her as a future champion.

5. The New Day and Sheamus & Holland and Butch’s rivalry continues

The feud between the New Day vs. Sheamus, Ridge Holland, and Butch has been going on for a while, and “Butch” f.k.a. Pete Dunne made his SmackDown in-ring debut this week.

Butch Lost the match after Xavier Woods pinned him with a surprise roll-up. This match helped in establishing Butch’s character, and also gave Woods and Kofi Kingston a much-needed SmackDown victory.

With WrestleMania 38 now in the rearview mirror, all eyes are on WWE Creative and how it will follow up after the ‘stupendous’ two-night event. Praise will flow if they make the proper innovative judgments. Certain fans will be left wondering if we’re back to the weekly grind that some Raw and SmackDown shows can be.