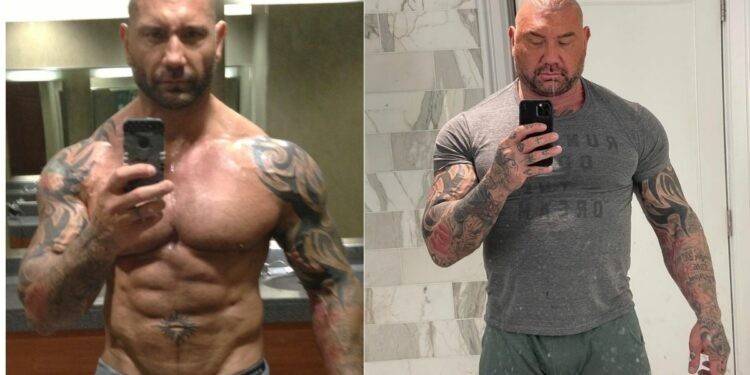 Former WWE Champion Batista has undergone a serious body transformation for a presumed movie role. He had one of the best bodies as a performer during his time in WWE. Batista is 53 years old and still maintains an impressive jacked physique.

Batista shares an image of of his transformation on Instagram

Batista has put on considerable weight, presumably for a the upcoming move Knock at the Cabin. He posted a hilarious picture on Instagram, claiming that he is in transition to a ‘fatty status.’ Batista added that his weight-gain process would be coming to an end and looked happy about it.

The details regarding his movie role is still unknown. But Knock at the Cabin is believed to be released in 2023. The movie began production in April 2022, and M. Night Shyamalan will be the director.

Batista has starred in several Hollywood movies since transitioning from wrestling to acting. He has found great success from his role as Drax from MCU’s Guardians of the Galaxy franchise. Other movies include Army of The Dead and Blade Runner, just to name a few.

Will The Animal return to WWE?

Batista had made it clear that he would not be coming out of retirement to wrestle one more time, like several WWE wrestlers from the past. He last wrestled against Triple H at WrestleMania 35 in a losing effort. The Animal has stated that he’d be willing to work for WWE in a non-competing role if that opportunity ever arises.

Batista was also supposed to get inducted into the WWE Hall of Fame in 2020, but it had to be canceled due to the pandemic. The induction was planned again in 2021, but scheduling conflicts prevented that from happening. Batista is thriving in Hollywood and has shown no signs of ever wanting to wrestle again.

What do you think about Batista’s body transformation? Drop your comments below