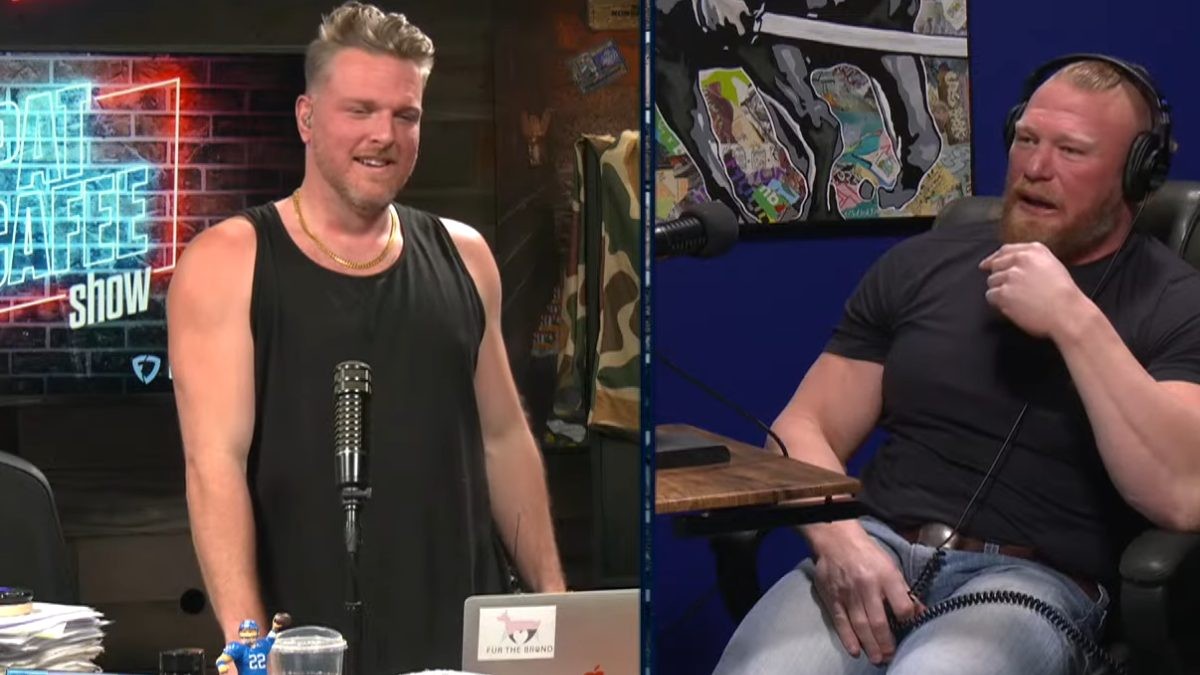 There are many things Brock Lesnar is known for. Fighting in the Octagon, turning people’s heads into exploding watermelons on live TV, F5-ing a shark into the ocean. Heck, he even spent an entire day as a tollbooth operator for ESPN. The one thing he doesn’t do well with is people. Brock Lesnar is a notoriously private person. He said as much in an interview with Stone Cold Steve Austin 7 years ago. So, it was a rare treat to see him unwind and chop it up with Pat McAfee. Brock Lesnar stopped by The Pat McAfee Show last night and gave us nearly 50-minutes of unfiltered insight into his life, his interests, and his relationship with the world of sports entertainment.

The Beast Incarnate is a 6-time WWE Heavyweight Champion, a 3-time WWE Universal Champion and has even held the UFC Heavyweight Championship on one occasion. He’s the only man who has accomplished that feat in the world of combat sports. He’s one of the last proven draws in WWE today; the man gets paid a cool mil-and-a-half for every Saudi appearance, for Pete’s sake. It makes sense why people would think he’s just concerned with the money; he says as much in this interview as well. However, that’s not all that Brock Lesnar gets out of being one of the biggest stars in Sports Entertainment today.

“There’s nothing else like putting on a good show & I always wanna go out there & perform” ~@BrockLesnar#PatMcAfeeShowLIVE pic.twitter.com/oydGKTMyQU

For Brock Lesnar, it’s all about the performance

Brock Lesnar is a true showman at heart. For him, the performance takes precedence. In recent years, his move set has been reduced to a handful of signature moves, but the selling point isn’t what he does in the ring; though there is nothing quite like a Brock Lesnar German Suplex. Brock enjoys competition & combat, and he is low-key the best seller in the business today. He has spent years perfecting his craft alongside Paul Heyman, and admits that wrestling is something he was “meant to do”. Lesnar’s recent run has shown us that he doesn’t need Heyman on the stick to hype him up either. His aloof-yet-homicidal cowboy gimmick has been blowing the roof off of every stadium he steps in, and he’s been loving it, as he told Pat and Co.

Brock Lesnar also took a moment to reflect on his relationship with his “bosses”; Dana White and more specifically, Vince McMahon. He spoke highly of the WWE Chairman, saying,

“I met Vince when I was younger. I look at Vince more as a father figure actually. Because I’ve learned a lot of things from him, and I was able to carry those things over and handle business with Dana. Vince is a self-made person, so is Dana. Took the company and made it public.”

While he’s usually a man of few words, it’s always a delight whenever Brock Lesnar decides to open up; because we get to find out more about this enigmatic-agrarian-cum-MMA-fighter, and these days, it’s him who’s doing the talking. Brock Lesnar is set to compete for the WWE Championship at the Elimination Chamber on February 19th, 2022, 12 PM EST/10 AM PST.