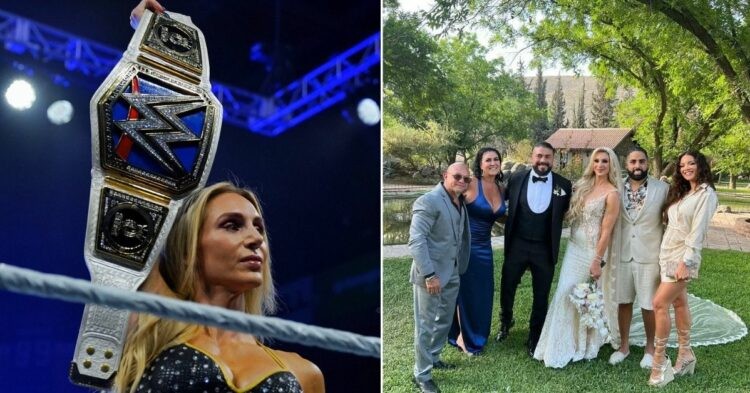 Former SmackDown Women’s Champion Charlotte Flair married former WWE and current AEW star Andrade El Idolo. They had been dating for over three years and finally tied the knot on May 27th, 2022. The couple made their vows in front of 160 guests including her father Ric Flair.

Charlotte Flair shared a video on Instagram showing the newly-wed couple having fun during their wedding ceremony. The couple was seen celebrating along with other former and current WWE superstars.

Charlotte Flair’s Instagram video went viral as Andrade was seen giving a lap dance to his wife. Andrade showcased bold moves. The Queen was seen admiring her husband as she sat on the chair. A lot of WWE superstars we present at the couple’s wedding.

The couple got engaged in 2020 and started dating while on the road for WWE shows. Some WWE superstars who attended their wedding include Finn Balor, Rey Mysterio, Lina Fanene (Nia Jax), and Apollo Crews. Andrade last wrestled for WWE in 2021 and is now performing for the rival promotion, All Elite Wrestling (AEW), as Andrade El Idolo.

WWE Legend The Nature Boy Ric Flair walked Charlotte down the aisle during her wedding. Videos of the 16-time WWE Champion were shared on social media from the ceremony with father and daughter holding each other’s hand during the most important day of her life and sharing a dance.

Ric Flair also wished her daughter on Twitter which went viral with more than 28,000 likes. Charlotte looked stunning in her wedding dress. Ric Flair is set to make a return to the ring for one final match in July.

Charlotte Flair has been on a hiatus since her loss to Ronda Rousey at WrestleMania Backlash for the SmackDown Women’s Champion. Charlotte has been promoted for future WWE events and is said to appear on the 15th of July edition of SmackDown.