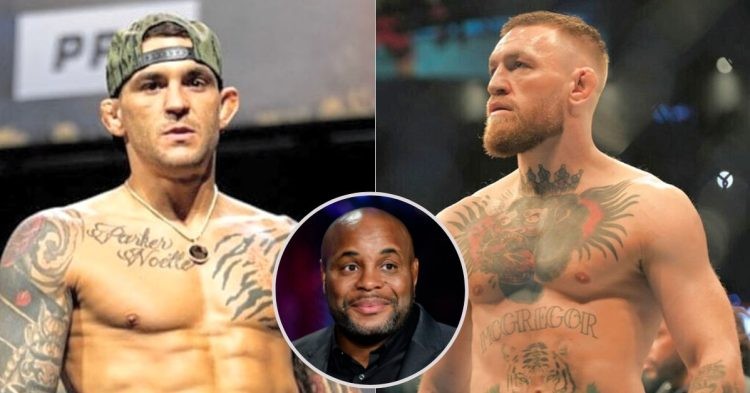 DC has some words of advice for Dustin Poirier (Image credits: UFC)

Dustin Poirier made an emphatic octagon return against Dan Hooker and put himself in a sweet spot when it comes to getting a title shot.

Justin Gaethje takes on Khabib Nurmagomedov for the undisputed lightweight title. And Dustin Poirier has a huge win over the interim champion, Justin Gaethje. That alone should be enough to earn Poirier a title shot in the near future if Gaethje wins against Khabib.

However, there is an even more intriguing matchup for Dustin Poirier in the division. The win over Hooker has opened up an opportunity to make the long-awaited rematch between Conor McGregor and Dustin Poirier. And as per Daniel Cormier, that’s the fight to make for the former interim champion.

In the recent episode of DC and Helwani, Cormier talked about the option Poirier has after the Hooker fight. Though DC likes the matchup between Dustin Poirier and Tony Ferguson, he would like to see the rematch with Conor McGregor first. DC stated:

“It’s a great fight … It’s gonna get him where he needs to be to earn another title shot, but for people that know Dustin, we’d prefer to see something different,”.

The first fight between Conor and Dustin ended with the Notorious one knocking out Poirier. However, that fight was in the featherweight and DC believes that the fight would play out in a different fashion at lightweight. Cormier explained:

“[McGregor] would be good. I’d like to see him fight Conor because it’s a different fight today. Dustin’s big, strong. And just like when we saw TJ Dillashaw cut down to 125 [pounds], when you’re cutting that massive amount of weight, sometimes that chin doesn’t hold up.

The first encounter between Conor McGregor and Dustin Poirier was over within one round. But it has to be considered that both the fighters have made significant improvements in their game. Although Conor will have an advantage going into the rematch Poirier has proved time and time again that he is one of the toughest fighters alive. DC continued:

“Conor landed a beautiful shot but [Poirier] was wearing his time at 145 out. I’m not saying he beats Conor. I don’t know … It’s a much better fight today than it was back then, partly due to the fact that he’s not depleting himself as much.

At the moment Conor McGregor is eager to get back into the octagon and he does not have an opponent yet. Considering that, Dustin Poirier might be a fun matchup for the former lightweight champion.