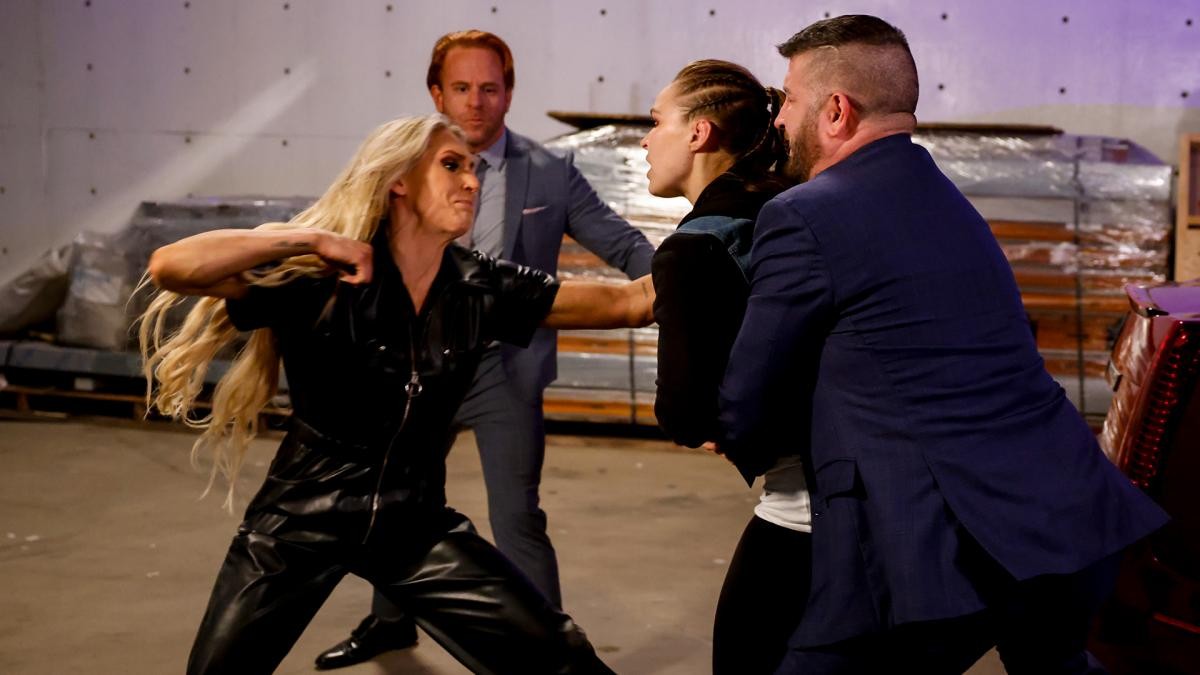 Ronda Rousey and Charlotte Flair are set to battle each other at WrestleMania 38 for the SmackDown Women’s Title. Rousey won the 2022 Women’s Royal Rumble match. The Baddest Woman on the Planet chose Charlotte Flair as her opponent at the Grandest Stage. Rousey and Charlotte have a huge history. This is a feud that has been building for over 7 years, even before Rousey made it to WWE. Last night on SmackDown the two closed off the show with a brawl. Let’s see how it went in detail.

Early on in the show, Ronda Rousey came out to cut a promo. It was bad from the start. Rousey’s promo seemed like she did not have the passion. It was a bland promo. Charlotte came out and that did not benefit this segment one bit. Charlotte played the generic heel and that was it. The main focus of the promo was Ronda not being a ‘one-trick pony’. Charlotte has been saying that the only thing Ronda Rousey has in her arsenal is the arm-bar. Still, to end the promo, Rousey said that she will either make Charlotte tap out or just break her arm. That line meant that Rousey was still going to lock in the arm-bar. So what was the point of the entire promo?

Later in the night, Rousey and Charlotte wear brawling at the parking lot. The brawl closed the show with Charlotte Flair standing tall.

.@MsCharlotteWWE unleashes on @RondaRousey in a wild parking lot brawl on #SmackDown! #WrestleMania

Is the feud boring?

If you ask me if the feud is boring, I would 100% say YES. Do not get me wrong, Ronda Rousey is one of the best female wrestlers in WWE. But what she needs to understand is that it is not just wrestling, this is ‘Sports Entertainment’. The difference between Rousey’s body language while wrestling and during a promo segment is like night and day. She needs to work harder on her promo segments, and her just smiling is not going to cut it.

Also when it comes to the brawl, that did not work out either. Firstly, they only had 2 minutes of TV time remaining. Secondly, the fans just witnessed an impressive Intercontinental Title match. The fans did not even receive enough time to digest what was going on. This brawl could have been the opening or the closing segment next week and it should have been given at least 5 minutes.

In 2019, the brawl between Charlotte, Ronda and Becky was insane. This brawl won’t even come close to that.

Hopefully, WWE book this feud better in the remaining 3 weeks. Especially, if WWE wants this to be main-eventing Night 1 of WrestleMania, they have a lot of work to do to get the fans invested.

Are you a fan of this feud? Let us know in the comments.