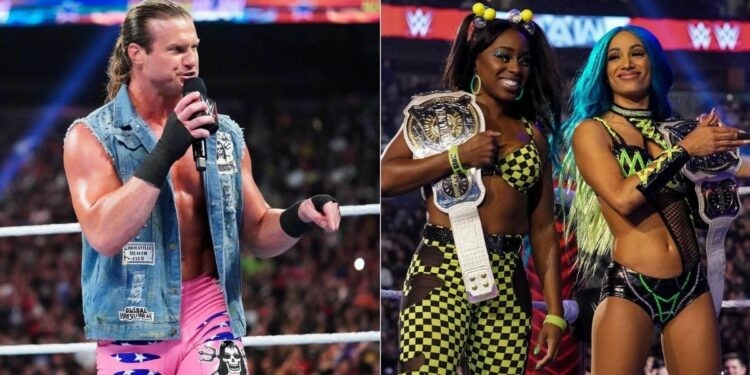 Former NXT Champion Dolph Ziggler has reacted to the suspension of Sasha Banks and Naomi following their walkout during RAW last week. WWE confirmed the suspension of the former Women’s Tag Team Champions on SmackDown this past Friday.

Ziggler has gone public to express his support for Sasha Banks and Naomi after WWE announced their suspension during the live broadcast of SmackDown. The Showoff posted an image of himself and Naomi on Twitter which appears to be a sign of support and solidarity for the former SmackDown Women’s Champion.

Ziggler has been absent from television since losing the NXT Championship to Bronn Breakker on the post-WrestleMania edition of RAW. His tag team part Robert Roode is in a similar situation and recently made his return in a WWE house show.

Backstage reports reveal that Banks and Naomi have major heat on them. But Ziggler is one of the few superstars who have showered their support for the former Women’s Tag Team Champions.

Sasha Banks and Naomi walked out of RAW due to their displeasure with WWE creative. They felt that they weren’t respected enough even after getting over as the Women’s Tag Team Champions. They also gave up their championship titles to WWE Head of Talent Relations, John Laurinaitis.

WWE later released a statement on their website claiming that Banks and Naomi let the fans down. They even stripped the women of their championships, and a new tournament will be held to determine new tag team champions.

WWE went as far as to remove all merchandise of Naomi and Sasha Banks from the WWE Shop. None of the women have responded to events that transpired on last week’s RAW. Naomi has removed all mentions of WWE in her social media accounts, while The Boss was seen having a great time at a music concert.

What are your thoughts on WWE suspending Sasha Banks and Naomi? Drop your comments below.