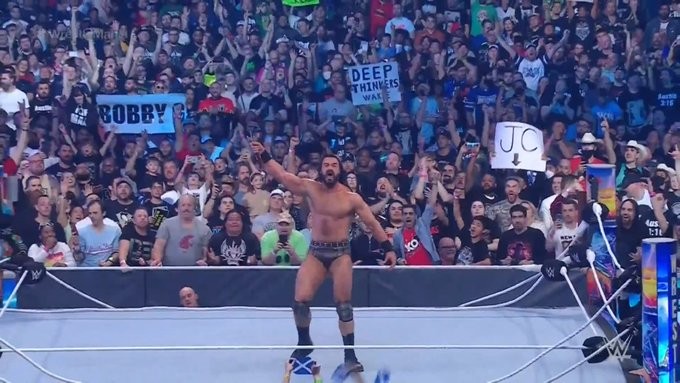 Drew McIntyre has finally done what we all wanted him to do; shut up Happy Corbin at WrestleMania 38! The Scottish Psychopath has been feuding with the host of Happy Talk for months, and has sent him packing at the Grandest Stage of Them All.

It’s hard to believe that a couple of years ago, it seemed like Drew was going to be the face of WWE. He defeated Brock Lesnar for the WWE Championship in the main event of WrestleMania 36 and held that title for most of 2020.

Last year, he lost to the All-Mighty Bobby Lashley at Night 1 of WrestleMania 37.

He’s been in limbo ever since, working storylines outside of the main event scene. McIntyre’s Road to WrestleMania 38 has been all fun & jokes; and in the worst way possible.

The Scottish Psychopath was feeling himself tonight. He hit a brutal belly-to-belly suplex on Corbin before executing a picture-perfect suicide dive over the top rope.

McIntyre then did the unthinkable; he became the first person to ever kick out of the End of Days!

He also cut the ring ropes in half in what has to be the most-satisfying pay-off at WrestleMania 38.

That pretty much sealed Corbin’s fate, who will most likely feud with Madcap Moss now. Hopefully, Drew can no move back into the main event scene.