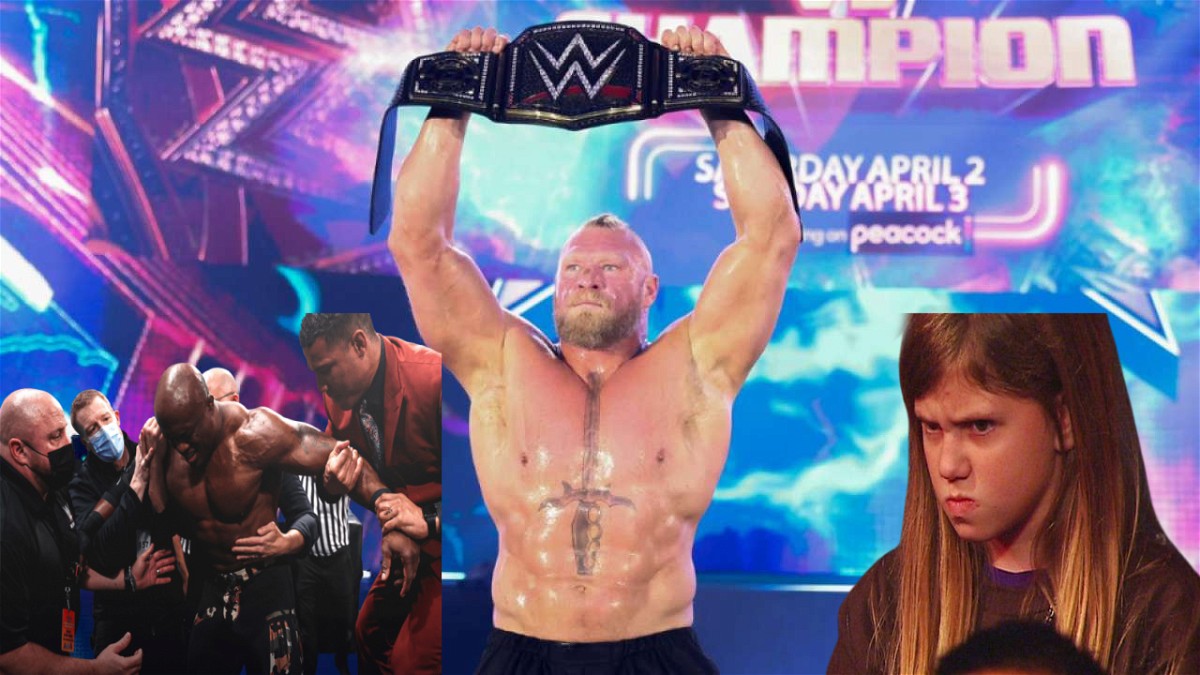 Yesterday was the Elimination Chamber Premium Live Event. The main event was the Men’s Elimination Chamber Match for the WWE Title. Brock Lesnar won the match to become the new WWE Champion. During the match, Rollins Buckle bombed Austin Theory through Lashley’s pod. This resulted in the All-Mighty WWE Champion getting injured. The Saudi Arabian crowd was cheering Brock all the way. The new Champion even began to celebrate with the crowd. The internet however was not that thrilled about the result. Why are the fans upset? If the All-Mighty is really injured, how long will he be out of action for?

What has enraged the fans?

The Beast was indeed unleashed inside the Elimination Chamber yesterday. Lesnar broke his way into the ring and as soon as he came out, in less than 2 minutes, the Beast decimated 3 of the top stars in WWE right now. Seth Rollins, Riddle and AJ Styles. None of them even had a chance.

The booking did feel lazy, it was basically what he did at the Rumble. Lesnar entered at no.30 and cleared the ring in a jiffy. The fans were upset for several reasons including the aforementioned reason.

With the top talents of Raw getting crushed in an instant did not sit well with the fans. All three of them have been at their absolute best. Their rise has been crushed and buried 6-feet under because of lazy booking.

Rollins, Riddle and Styles all destroyed in a matter of minutes. That’s how to get people over ????

For a  titled ‘Creative‘ they certainly seem to lack that one aspect. Again, if Brock Lesnar was indeed going to walk into WrestleMania to fight Reigns in a Title vs Title match, the whole point of Lesnar losing the title was pointless. All that did has only buried Lashley too.

What happened to Bobby Lashley?

As mentioned earlier, the Buckle Bomb from Rollins into Lashley’s pod injured him and he was taken out of the match. The fans felt this was absolutely one of the worst ways to book Lashley. Although there was a portion of fans that were sincerely concerned about Lashley’s well-being, the majority was only upset about this horrible booking.

Dave Meltzer of Wrestling Observer Radio had reported that Lashley was in fact injured weeks before Elimination Chamber and WWE was also aware of this a few weeks ago. If this is indeed true, then WWE is not just horrible in the creative aspect, but are horrible in general.

Bobby Lashley reportedly will be out of action for months. The injury is severe and will potentially be missing WrestleMania this year.

Did you like the Elimination Chamber event? What are your thoughts on Lashley competing with an injury? Let us know in the comments below.

UFC Vegas 48 Fight Purse: How Much Did Jamahal Hill and Johnny Walker Earn at the UFC Fight Night Headliner