Ex-Marine Turned WWE Superstar, All You Need to Know About Lacey Evans 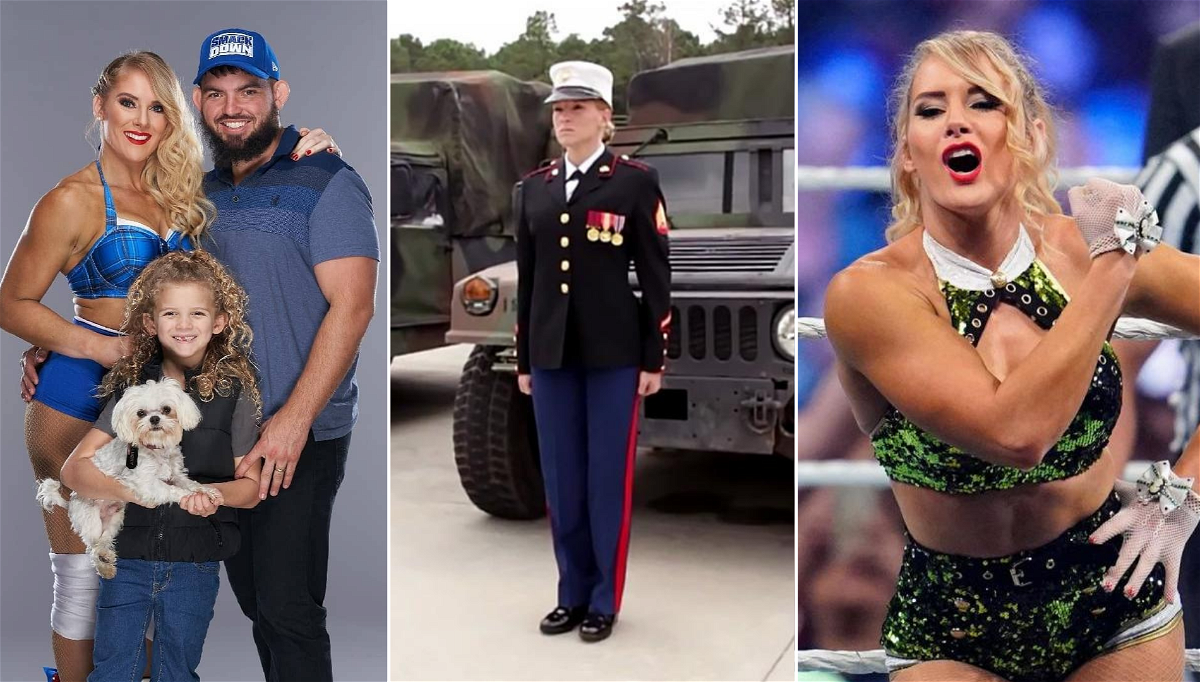 WWE’s Sassy Southern Belle, Lacey Evans has been out of action for nearly a year since she was pregnant with her second child. Last week on SmackDown we saw Evans make a return in the form of a Video Promo. Evans talked about her rise, life, and what the future entails for her in WWE. Not a lot of people know much about her beyond her career in WWE. Let me share everything about the Sassy Southern Belle that you need to know.

On March 20th, 1990, Macey Evans (F.K.A Lacey Evans) was born in Fannin County,  Georgia. Lacey Evans was born in a large family with several siblings. Evans is now currently residing in South Carolina with her husband, Alphonso Estrella-Kadlec, and her two children.

Evans was born in a melancholic household. Her father was addicted to drugs and alcohol and as a result, was abusing his wife and children. Mrs. Evans could only tolerate this disdainful relationship to an extent. In order to raise her children well, She left her husband and took the kids with her.

Lacey’s mom worked hard to raise her children. Lacey was motivated to help her mother and siblings as much as possible. She worked hard and managed to give her family a good life.

On January 13, 2010, Lacey Evans got married to her longtime boyfriend, Alphonso Estrella-Kadlec. The couple have been blessed with two children. Their first daughter, Summer Estrella-Kadlec even featured in a few episodes of SmackDown. Summer, in an effort to support her mother, had an altercation with Sasha Banks.

As mentioned earlier, Lacey Evans was determined to help her single mother to support the family financially. Evans worked hard and maybe it was her rough childhood that made her a brave and courageous woman. Lacey was one of the youngest women to join the United States Military. In 2009, at the age of 19, Evans joined the United States Marine Corp. She served for almost 5 years. In that period between 2009 and 2014, Evans has serviced in the Iraq and Afghanistan wars.

Lacey attained the designation of a Sergeant in very quick time and has won a badge for National Defense and 2 Service Medals including the Global War on Terrorism Service Medal.

6 years later, Evans had the privilege of returning to the Marine Corps as part of WWE’s Annual Tribute to The Troops. Evans talked about what made her join the U.S Marine Corps and what it feels like to be a Marine.

“This is what made me who I am today”

The evolution of Lacey Evans in WWE

Lacey has been open about her father’s dreams of becoming a professional wrestler. But that remained a dream as he went down the wrong path. Despite the abuse from her father, she still wanted to to something in honor of him and in 2014, she began her journey to become a professional wrestler. The future ‘Lady of NXT’, began her training at the American Premier Wrestling Training Facility in Statesboro, Georgia. She was under the tutelage of Coach and Author Tom Caiazzo.

In less than 2 years of training, on April 12th, 2016, Evans signed with WWE. She started her WWE career by teaming up with Bianca Belair during house shows dating from October 20th of the same year. Other than her in-ring ability, Evans did need to work on her promo skills and needed to build a character. After a lot of training in WWE’s Performance Centre, Macey Estrella-Kadlec was given the ring name Lacey Evans and on January 17, 2018, Evans made her television debut for NXT. Lacey Evans established herself as the ‘Lady‘ of the Black and Gold brand.


Although, Evans did not reach the top of the mountain to become the Champion, but she does hold victories of some of the former NXT Women’s Champions. The Lady of NXT has defeated superstars such as Ember Moon, Io Shirai, Candice LeRae, Kairi Sane and even Dakota Kai. Interestingly though, the one woman she has been unable to defeat is her former tag team partner, Bianca Belair.

After her 2-year run in NXT, Evans made her main roster debut at the 2019 Royal Rumble event. From that point on, the Classy Lady of NXT evolved into the ‘Sassy Southern Belle‘. The former NXT Star continued her run as a heel on the main roster as well. She got very close to winning the Raw Women’s Title but, ‘The Man‘ Becky Lynch proved to be too much for her. Her final run on Raw before she had to go into maternity leave, was a weird storyline with Charlotte Flair and ‘The Nature Boy’ Ric Flair. It is best that I do not go into all the details of this weird storyline.

Evans is one of the first 2 women to compete at Saudi Arabia. It was one of the most emotional moments for her and her opponent Natalya. The two despite having a lacklustre feud, put on an entertaining match that had the crowd chanting “This is Awesome!”

Lacey Evans on what makes her different from other WWE superstars

Lacey Evans has played a heel for most of her WWE career, but now with we will be seeing, going forward is going to be the “True” Lacey Eavans. The Sassy Southern Belle made a surprise return in the form of a video package to a fairly decent pop from the crowd. She mentioned her past and the struggles her mom, Evans and her 4 siblings went through.

” I may not have the straight shot to stardom like these other woman have been blessed with. That’s all right because that’s what makes me different from all the rest”. This was one of the most heartfelt promos from Lacey and she has rarely opened up to the public about her struggles.

“I’m motivated, ready for anything”. We might be seeing a few more video packages from the Sassy Southern Belle before she makes her in-ring return. But I certainly see Evans holding the SmackDown Women’s Title in the very near future.

Lacey’s life is impressive and more importantly motivational. Her life is an example of the fact that, no matter how bad life hits you, ‘You’ can fight back and rise to the top.