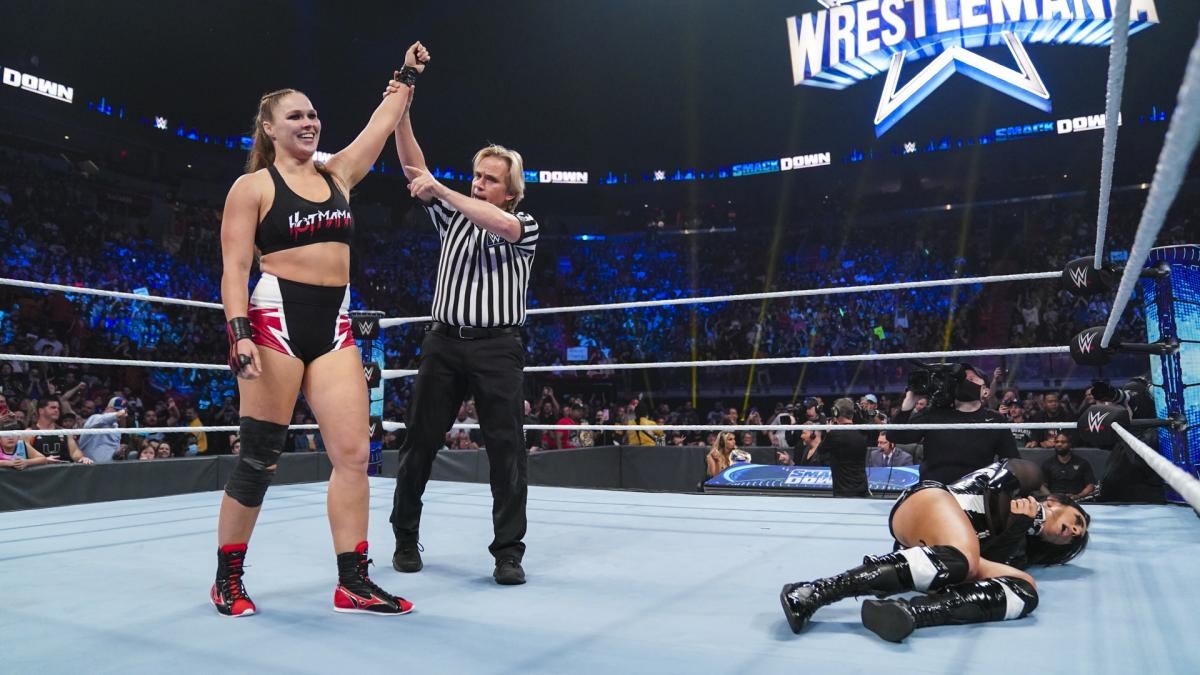 Tonight we got to witness another great episode of WWE SmackDown. Now it is time for another edition of the Highs & Lows. WrestleMania got two more matches, superstars made their in-ring debut and we saw new champions on the show. Of course, there were also some disappointing moments. Let’s look at them all. I would once again like to thank Simon Miller of WhatCulture Wrestling for this idea. Let us kick things off with the lows and we shall end on a high note.

SmackDown is always one of the best pro-wrestling shows on Television. Occasionally there are some disappointing moments.

The boring feud between Drew McIntyre and Happy Corbin

The Scottish Warrior, Drew McIntyre will fight Happy Corbin on Saturday night at WrestleMania 38. Sadly, the build has been boring to the core. the only saving point was the matches between Drew McIntyre and Madcap Moss.

Tonight, Drew wrestled Jinder Mahal while Corbin and Madcap Moss were playing poker with some of the developmental talents. Yet again Moss cracked some horrendous jokes.

Drew defeated Jinder Mahal, cut another generic promo and then went backstage and threatened Corbin with ‘Angela‘ the Sword.

This is one of the longest and most boring builds heading into WrestleMania 38.

Rick Boogs gave yet another amazing introduction for Shinsuke Nakamura. As Nakamura made his way to the entrance ramp, the Usos took out both Nakamura and Boogs. Both Nakamura and Rick Boogs were not seen after that. Sadly, all we saw of Nakamura and Boogs was for another Toyota commercial and then to get beaten down to a pulp later. Maybe they are next in line to compete for the SmackDown Tag Team Championships.

The show kicked off with the Intercontinental Title match. From the get go, Ricochet was looking to roll up Sami Zayn for the win. But Zayn did not give in. School-boy roll-ups and multiple small packages by Ricochet but nothing worked out. Finally Zayn gained a little momentum. Instantly, Johnny Knoxville showed up talking trash to Sami Zayn. Ricochet capitalised on the distraction and hit a Dragon-Rana with a small-package and got the win. Ricochet has won the Intercontinental Title for the first time in his career.

Sami Zayn was irate upon losing the title. Zayn threw a tantrum backstage and challenged Johnny Knoxville to a match at WrestleMania.

A few moments later, Johnny Knoxville accepted the challenge and WWE has made the match official for WrestleMania 38.

.@realjknoxville will look to make a “Jackass” out of @SamiZayn when the two bitter adversaries clash on #WrestleMania Sunday! https://t.co/gMQd3FMj3u pic.twitter.com/6GaEviKSwb

On Wednesday, Vince McMahon was a special guest on the Pat McAfee Show. The Chairman of WWE offered Pat McAfee an opportunity to compete at WrestleMania 38. On SmackDown, Austin Theory showed up and revealed that he is the opponent for Pat McAfee and slapped him and left.

Pat McAfee was beyond pissed and was asking Theory to come back and do it again. The match was then confirmed by WWE later. We have already seen Pat do an amazing job inside the ring on NXT. So everyone is excited to see Pat enter the ring once more.

The main event of the night was Ronda Rousey vs Sonya Deville. This was Rousey’s first match ever on SmackDown. Both Sonya Deville and Ronda Rousey came to the ring wearing amazing wrestling gear. Deville proved to be no match for the Baddest Woman on the planet. Rousey rag-dolled Deville and quickly got the win the arm-bar.

Upon seeing Rousey win with the arm-bar submission, Charlotte called her a “one-trick pony“. Rousey invited Charlotte to the ring. The SmackDown Women’s Champion laughed and entered the ring. Quickly, Rousey took her down and locked in the Ankle-lock, showing that she has a lot more up her sleeve than just one move. The Queen tapped out in a jiffy.

She’s got more than an armbar, @MsCharlotteWWE! #SmackDown @RondaRousey pic.twitter.com/7OhDnnnN5y

This match was supposed to take place at the Elimination Chamber. On seeing this match tonight, it made me want to see it again and again. This was, without doubt, the match of the night. So many near falls. There were so many instances when the Raiders could have picked up the win. The same goes for the Usos as well. After an impressive back and forth, the Usos finally hit the One-D for the win.

The Usos retained their titles. I would not be surprised if they compete in another series of matches leading up to WrestleMania.

Besides these segments and matches, we saw Naomi defeat Carmella and also Roman Reigns cut another promo trashing Brock Lesnar.

As usual, SmackDown was another fun night of Sports Entertainment.

Did you like SmackDown? What was your favourite segment? Let us know.