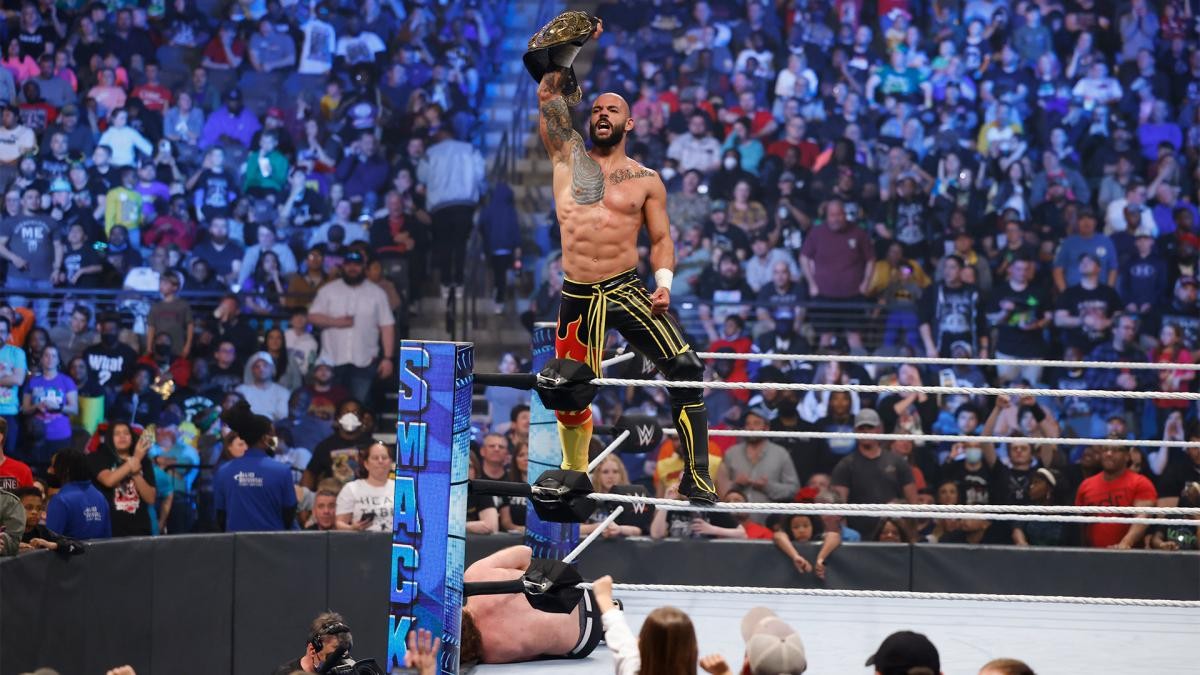 Last night was another episode of WWE’s SmackDown. So, you know what that means. It is now time for another edition of the Highs & Lows. The Beast incarnate Brock Lesnar wanted to get his revenge on Roman Reigns and Sami Zayn got his rematch for the Intercontinental Title. Also, it was a brawl fest last night and more. Of course, there were also some disappointing moments. Let’s look at them all. I would once again like to thank Simon Miller of WhatCulture Wrestling for this idea. Let us kick things off with the lows and we shall end on a high note.

I have mixed feelings about Last night’s SmackDown to be totally honest. Let’s look at the lows one by one.

The arrival of Pete Dunne to the main roster was honestly a long time coming. But I did not expect him to arrive like this. Sheamus and Ridge Holland said that they have connected with one of their friends and they know him better by his nickname ‘Butch‘. It was none other than Pete Dunne.

The Bruiserweight’s name has been BUTCHered on arrival.

The fans are beyond upset over this. The entire Wrestling Fan Base is irate.

Every WWE fan to whoever decided to change Pete Dunne’s name to Butch. #Smackdown pic.twitter.com/oSnt1igpmr

Following a horrendous debut of BUTCH, Big E and Kofi Kingston were set to face the team of Sheamus and Ridge Holland. It was a decent match but towards the end, it got a lot messy.

Towards the end of the match, Ridge Holland and Big E were brawling at ringside. Holland hit a belly-to-belly suplex on Big E. Unfortunately, E landed on his head and as a result broke his neck.

An UGLY landing for Big E at ringside. Looks like he landed on his head and he was not seen again on-screen after this. #SmackDown #WWE
pic.twitter.com/VizfehW7ug

Big E was rushed to the hospital. Thank god he is fine.

The entire wrestling community has been wishing Big E a speedy recovery.

I saw your vid @WWEBigE. You say don’t worry, but you know what it is…. Here’s to your healing brudda. pic.twitter.com/CfyL5dv6VX

Ronda Rousey came out to cut a promo on Charlotte and to me, it felt like Rousey does not care at all. She is very bad at cutting promos. I thought Charlotte would save the segment but sadly, she was equally bad.

Then at the end of the show, they brawled with each other. With hardly only 3 minutes left on the show, this brawl seemed pointless. The brawl was nothing when compared to the backstage braw they had during the build to WrestleMania 35.

One of the major reasons was the time constraint. We could have easily got this brawl next week with more time allotted to the segment.

.@MsCharlotteWWE unleashes on @RondaRousey in a wild parking lot brawl on #SmackDown! #WrestleMania

The lows were disappointing but at the same time, we had a couple of highs as well. Let’s look at them

Just before the start of the Intercontinental Title match, Austin Theory showed up and slapped McAfee yet again. This time around McAfee was not going to let this go. He got up on the announcer’s desk and started to throw down with Theory until they were separated by officials.

The show kicked off with an angry Brock Lesnar. Lesnar came out and said that all he cares about is getting revenge on Roman Reigns. He did not care about the WWE Title, not any WrestleMania contract signing. Paul Heyman came out and said that Roman Reigns is not here. Lesnar asked Heyman, “Paul if Roman is not here, then who is going to protect you?”. Heyman got scared and started to run, Lesnar went chasing Heyman.

In this chase, Lesnar just pushed around the security like they were dolls.

Next week, The Beast, Brock Lesnar will get face to face with Roman Reigns.

It was an average episode of SmackDown. Although we got a lot of highs, the overall show was a disappointment. Hopefully, Big E returns soon. Wishing him a speedy recovery.

What was your favorite part of the show? Let us know.