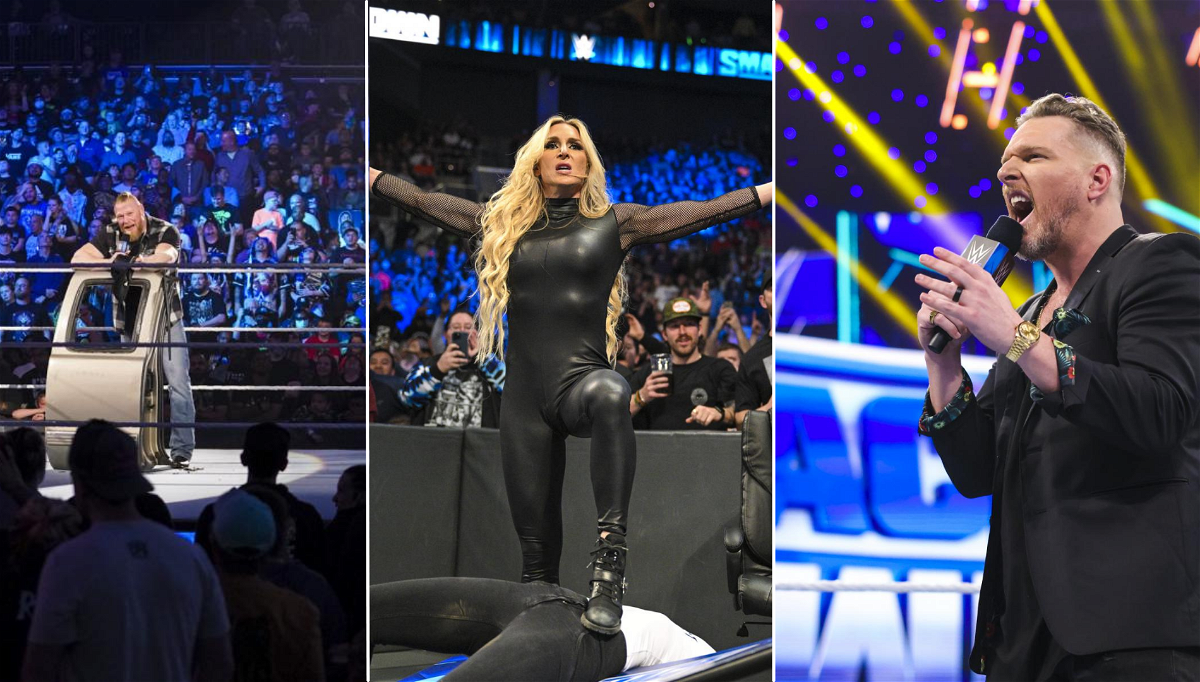 Last night was another episode of SmackDown. So, you know what that means. It is now time for another edition of the Highs & Lows. All the SmackDown women stole the show, Pat McAfee was forced to apologise and the Beast was out for blood. It was yet another fun show. Of course, there were also some disappointing moments. Let’s look at them all. I would once again like to thank Simon Miller of WhatCulture Wrestling for this idea. Let us kick things off with the lows and we shall end on a high note.

The Lows of SmackDown

To be honest there was not a lot of disappointing moments on this week’s SmackDown. The only low point from the entire show was a 6-man tag team match. It was between the team of Happy Corbin, Jinder Mahal and Shanky and the team of Drew McIntyre and the Viking Raiders. The match, on the whole, was not that bad but this feud between Drew McIntyre and Happy Corbin is tiring. A pointless feud that has been going on for several months and now Jinder, Shanky and the Viking Raiders are all involved. It feels like all the superstars that creative have zero plans for are being dumped into this feud.

Oh, did I forget to mention who won? As usual, the baby-faces won just like the previous 50 times.

The Highs of SmackDown

The Beast is out for blood

SmackDown kicked off with the Bloodline addressing the WWE Universe. As the Tribal Chief, Roman Reigns was speaking, Paul Heyman interrupted and said that Brock Lesnar had an issue with his flight and will not be here. Upon hearing that Roman started to call the Beast a coward and so forth. Heyman stopped him once again and said that the Beast is on his way to SmackDown. Roman was actually terrified, he and the Bloodline walked away.

They reached their car and just at that time, Brock Lesnar came with a freaking forklift and crushed their car. The Bloodline escaped in just a hair’s breadth.

Lesnar then ripped apart the door of their backup truck and brought it to the ring. The Beast said he is out for blood and will rip Reigns apart.

RIP OFF A TRUCK DOOR AND BRING IT WITH YOU!#TheBeast @BrockLesnar is here! #SmackDown pic.twitter.com/zVG2FJbA7s

After his actions last week, Pat was ordered by Vince McMahon to apologise to Austin Theory. Before apologising, McAfee talked about how much he loves “professional wrestling“. It is a weird week isn’t it, we had AEW acknowledge “Sports Entertainment“ while WWE acknowledged “Professional Wrestling“.

The Pat McAfee promo segment was really fun to watch, which was cut short by Austin Theory. Pat struggled to say the words “I am sorry” to Austin’s face but then he did apologise to Austin Theory but for all the wrong reasons.

Surprisingly, Austin Theory accepted the kind of “Sorry not sorry” apology and took a selfie with Pat and then left.

The Women steel the Show

Last night on SmackDown we saw a tag team match involving the team of Naomi and Sasha Banks and they took on Rhea Ripley and Liv Morgan. Honestly, it was a barnburner. If there is a match you want to see from last night, I highly suggest you watch this one. Multiple near falls, excellent wrestling and of course, a Tower of Doom spot, it was all absolutely phenomenal.

I for one am excited, ignoring the horrendous acting and promo skills of Natalya, she is one the best wrestlers in WWE. Shayna is another exceptional talent. Both of them have been mistreated in the company for far too long and they have decided to team up. I love the idea and would not even mind them winning the match at WrestleMania.

Charlotte Flair came out to the ring gloating about beating up Ronda Rousey last week. The Queen called out the Baddest Woman on the Planet. Rousey came out and Charlotte seemed to be worried but it was all a ruse. Charlotte had several kendo sticks planted around the ring. It was a nice callback to their match at Survivor Series 2018. Rousey looked to have the upper hand for hardly a minute and then The Queen took total control. Charlotte beat up Ronda Rousey and powerbombed her through the announcer’s desk.

Last week their brawl was one of the lows, this week it was the complete opposite. Giving the two a lot of time makes a whole lot of difference. I am looking forward to their match now.

There were several reports that WWE is in panic mode for WrestleMania 38, but now it looks like they do have a clear picture. It is going to be one hell of a WrestleMania.

Did you like SmackDown this week? Are you excited for WrestleMania 38? Let us know.