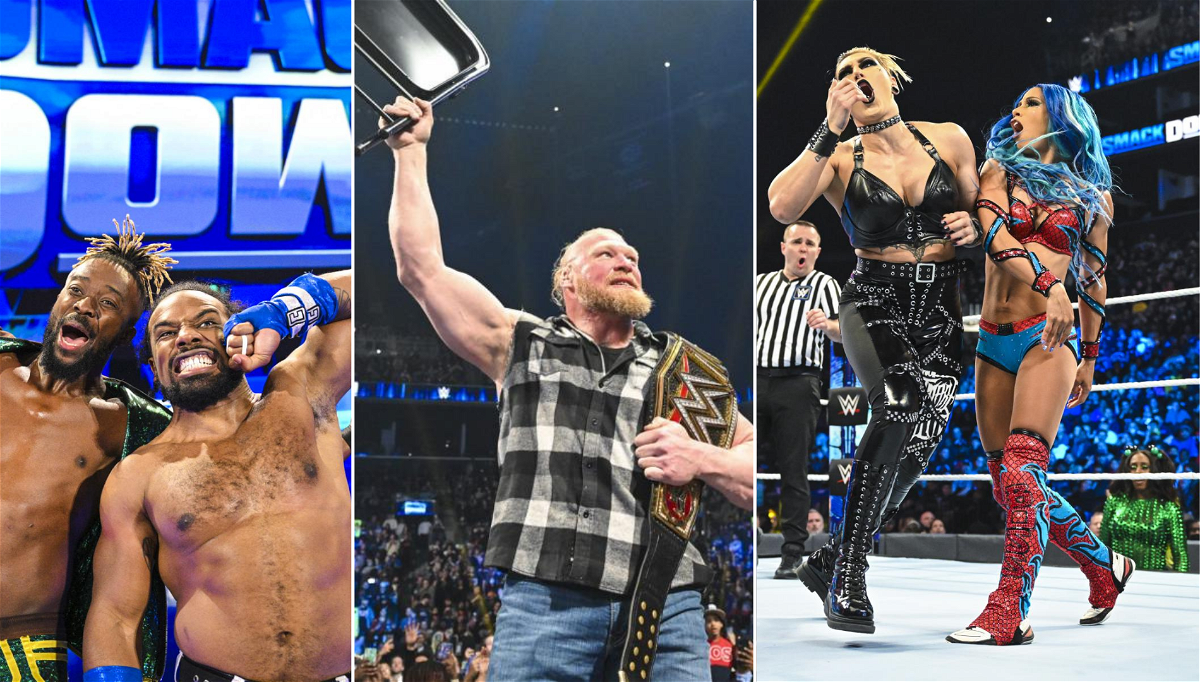 Last night was another episode of WWE SmackDown. So, you know what that means. It is now time for another edition of the Highs & Lows. Brock Lesnar goes on a rampage, A huge star returns from injury and the women steal the show once again. Of course, there were also some disappointing moments. Let’s look at them all. I would once again like to thank Simon Miller of WhatCulture Wrestling for this idea. Let us kick things off with the lows and we shall end on a high note.

The Lows of SmackDown

This is the penultimate episode of SmackDown before WrestleMania 38. SmackDown delivered for sure but still Low moments in the show existed.

The ‘Championship Contender’s Match’ returned on SmackDown last night. The new Intercontinental Champion, Ricochet faced Angel Garza and in a matter of minutes, Angel Garza won the match. Humberto helped Garza win the match, so Ricochet immediately challenged Humberto to a match. Thanks to  Angel Garza, Ricochet lost yet again. To make things worse, Ricochet apparently asked management for a Triple Threat match with the same two superstars. WWE have been treating the Intercontinental Title very badly lately, I thought that would change when Ricochet won the title, but nope, it has not change. The Intercontinental Title has gone from being the workhorse title to worse than the 24/7 Title.

Last week Ronda Rousey and Charlotte had one of the best segments on the show. The sole reason for that was the fact that Ronda Rousey did not speak a word. This week, Ronda Rousey showed up to cut a promo. Within a few seconds, Rousey messed up “SmackDown Women’s Champion” and called it the “Women’s SmackDown Champion”. She saved it though, by calling herself, “The SmackDown Champion”. But everything after that was beyond poor. Whenever Rousey cuts a promo, it for some reason feels lacklustre and she seems to not care at all. All that changes when she is throwing fists and kicks.

.@RondaRousey vows to beat @MsCharlotteWWE at her own game at #WrestleMania 38!#SmackDown pic.twitter.com/wF035l0W0W

A humble request to WWE, let Rousey not cut promos and just get involved in brawls. If you so desperately want her to cut promos, then let her practice more.

The Highs of SmackDown

It kicked off as a brawl between the Usos and the team of Nakamura and Boogs. Boogs was throwing the Usos around like they were basketballs.

Then the match officially started and Nakamura and Jimmy killed it. Finally, the King of Strong Style version of Nakamura is back. This match made me get even more excited for the SmackDown tag team titles match at WrestleMania 38 next week.

At WrestleMania, the Women’s tag team titles will be defended by Carmella and Queen Zelina in a fatal-4-way tornado tag match. So, as a preview, we got one half of each team competing in a fatal-4-way match last night on SmackDown. It was an incredible match. Sasha Banks was the highlight. At one point, she locked in the Bank Statement on two superstars at the same time. Banks also won the match by forcing Zelina to tap out.

Zelina took the most beating out of the 4. At one point, Banks locked in the Bank Statement on her and at the same time, Shayna Baszler was locking in a unique version of the arm-lock.

The women have been killing it lately on SmackDown. This was another example of how good the Women of WWE are. I ask for WWE management to use these great talents more often.

King Woods is back on SmackDown

Kofi Kingston was making his way to face Ridge Holland, Kofi stopped at the ramp and revealed to Ridge Holland and the rest of the WWE Universe that he will not be wrestling tonight, it would rather be the returning King Xavier Woods. It was a pleasant surprise, to be honest. I did get a little worried that, Woods was going to face Ridge Holland on his first match. Woods played it smart and won the match in very quick fashion with the Small Package roll-up.

The show kicked off with Brock Lesnar entering Reigns’ locker room. The Beast began trashing the suite and smashed everything he set eyes on.

Lesnar destroyed the entire suite of Roman Reigns and still was chilling in there awaiting the arrival of the Tribal Chief.

Roman Reigns and Paul Heyman showed up at the closing stages of SmackDown after touring Brooklyn. Reigns entered the ring and warned the Beast to leave his locker room. The Beast casually left the locker room, took an axe and destroyed the SUV that the Tribal Chief came in. Lesnar was not done with that. He came to the ring and took out the entire security.

Reigns ran to the back and then sent a warning to the Beast. But Brock did not care, he went on a rampage beating up the security and he even chased Pat McAfee and Michael Cole away.

This was another excellent SmackDown. We also have a stacked card for next week. SmackDown has always been fantastic, but these past few weeks, it has been exceptional. Cannot wait for next week. I hope Raw takes some lessons from SmackDown.