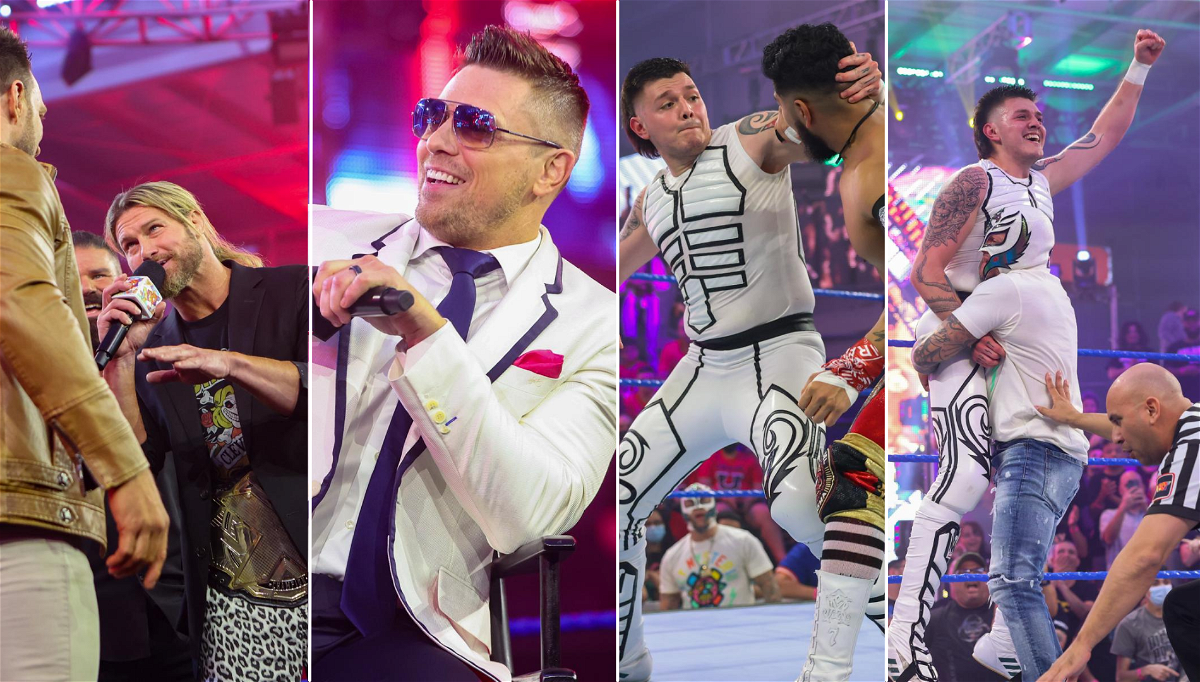 Last night was another episode of WWE NXT 2.0. So, you know what that means. It is now time for another edition of the Highs & Lows. We got a lot of superstars from Monday Night Raw who showed up on NXT 2.0. A lot of matches were set up for NXT Stand & Deliver and more tributes to the late Scott Hall. Of course, there were also some disappointing moments. Let’s look at them all. I would once again like to thank Simon Miller of WhatCulture Wrestling for this idea. Let us kick things off with the lows and we shall end on a high note.

This is a classic jealousy storyline. Despite having seen this play-out over and over again, this story has to be the worst of the lot. I personally do not mind repeating storylines, but there has to be something unique and something different. An element of entertainment is need in any story and this one had zero entertainment. This may have been the first time that both opponents made it to the show at the same time with the same music. That was nice and had a slight comical element to it. After that, everything went downhill. We did see the return of Dexter Lumis and that was nice for about a minute.

Lumis’ return was also spoilt when both the women decided to have a ‘Smooch-off‘ in the middle of the ring. The Show is called NXT 2.0 and I thought that meant the show is progressing forward, but with segments like this, we are slowly getting back to the ‘Divas Era‘.

Last week, Cora Jade and her partner Raquel Gonzales lost in the semi-finals of the Women’s Dusty Cup. One of the major reasons for that was Toxic Attraction. Gigi Dolin and Jacy Jane interrupted the match and took out Raquel Gonzales. It is reported that Raquel may be out of action for months. Cora decided to get revenge. She stole the titles of the Toxic Attraction and trapped each of them separately.

Finally, when she tried to take away Mandy Rose’s car, the NXT Women’s Champion was already laying in wait for Cora. It turned out that it was all a plan by Toxic Attraction. Rose took out Jade and then took a spray can and sprayed a white line on Jade.

Despite how bad the segments were, the small tribute to nWo was nice.

Here are my issues with the overall segment. Firstly, how dumb is Cora Jade? She did not think twice when she noticed the titles were conveniently lying next to her during her interview segment. That ignorance is more than enough evidence that she is not fit to even be in the title picture. Adding to this, the entire segment was way too cinematic and was way too predictable. Also, how did Jade open the Range rover without a key? Shouldn’t have that been another big clue to Jade that she has been trapped by Toxic Attraction? Honestly, throughout the segment, Cora Jade was only buried even further.

Surprisingly we got to see multiple RAW stars show up on this week’s NXT 2.0. The Miz held a fun Miz TV segment with the Dirty Dawgs as the guest. Dolph Ziggler was gloating about his NXT Title win. Surprisingly, LA Knight showed up and challenged Ziggler to a title match later in the night. Ziggler accepted. The one thing that does not make sense to me is, LA Knight continuous to lose his matches but yet he asks and receives title opportunities while the superstars that defeat him are still fighting to even get a chance to be in the title picture.

Rey Mysterio and Dominik Mysterio also showed up. Dominik challenged Raul Mendoza to a match on the show.

Both Dominik and Raul Mendoza put on a hell of a battle. Also, Rey Mysterio and Santos Escobar had a small altercation. Cannot wait for that match.

Santos Escobar and Cameron Grimes fought each other in a qualifying match for the NXT North American Title Ladder Match at NXT: Stand & Deliver. Grimes and Escobar put on a good opening match.

Finally, after an impressive back and forth, Santos Escobar picked up the win. Escobar qualified and is certainly a strong threat for Carmelo Hayes and his NXT North American Title reign.

What a match!@EscobarWWE is headed to NXT #StandAndDeliver to battle for the NXT North American Title! pic.twitter.com/IHgywlk6Z3

A-Kid made his way to NXT 2.0 from NXT UK. A-Kid wrestled Kushida. It was a short match but honestly, A-Kid was impressive. The kid has a bright future.

What a debut for @AKidWrestler!

He picks up a HUGE win over @KUSHIDA_0904 on #WWENXT pic.twitter.com/YKSM8DwOZN

LA Knight is a great talker but he hardly impresses in the ring. Dolph Ziggler carried him throughout the match and it was awesome. After a great match, Ziggler hit the Super-Kick and got the win to retain his NXT Title.

After the match, Bron Breakker showed up and demanded a rematch for the NXT Title. Ziggler agreed and the match was on. Ziggler will defend his title against Bron Breakker at NXT Stand & Deliver.

Besides this, also Tommaso Ciampa vs Tony Deangelo and a triple threat for the NXT Tag Team Titles have also been made official for NXT Stand & Deliver.

It was another fun NXT 2.0. I wish they improve the women’s division more and avoid all the silly stuff, then the show would be flawless.