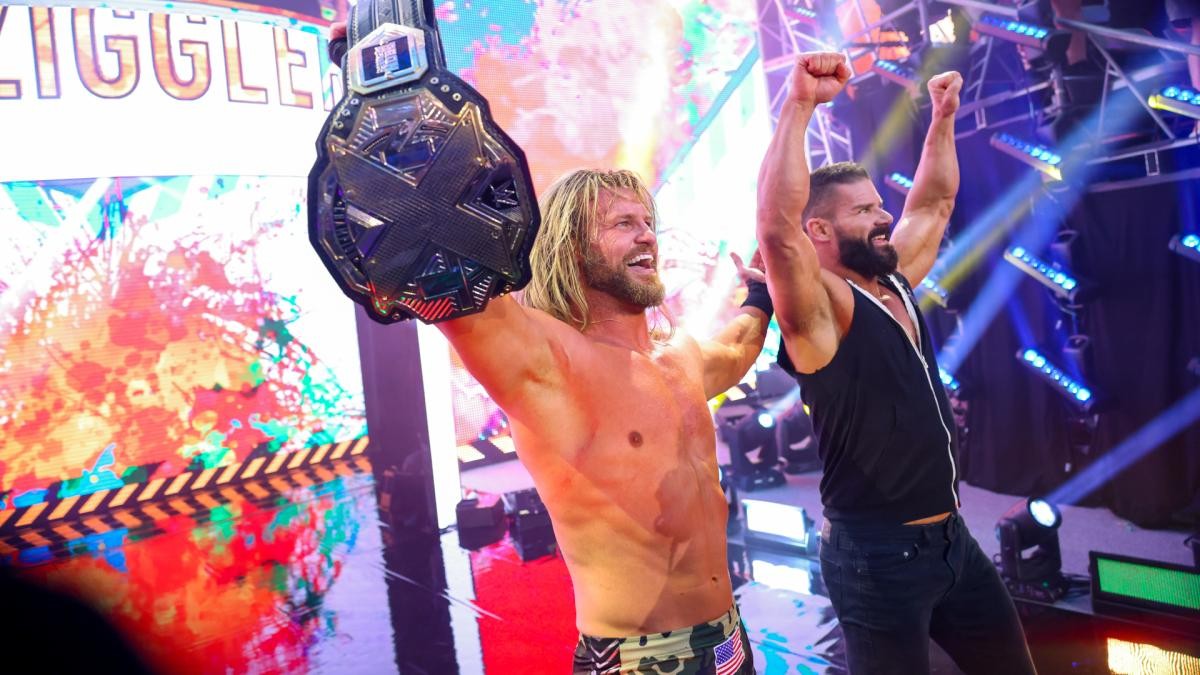 Last night was WWE NXT 2.0 Roadblock. So, you know what that means. It is now time for another edition of the Highs & Lows. We saw the Women’s Dusty Cup’s Semi-Finals. Bron Breakker defended his NXT Title in a triple threat match. The Men’s Dusty Cup Winners were set to challenge Imperium for the tag titles and more. New feuds began, the Last Man Standing Match more matches teased for NXT: Stand & Deliver, love is still in the air and more. Of course, there were also some disappointing moments. Let’s look at them all. I would once again like to thank Simon Miller of WhatCulture Wrestling for this idea. Let us kick things off with the lows and we shall end on a high note.

LA Knight and Grayson Waller competed with each other in a Last Man Standing Match. Before the match, LA Knight cut a promo in the middle of the ring. Usually, Knight is good at promos but this time around something was off. The promo was boring.

After that, the match began. It is a Last Man Standing Match, so we can expect a lot of violence in the match. A lot of weapons were involved but still, it did not do much for me. I was uninterested for the most part. I believe one of the reasons was the poor camera work.

The closing segment was the only positive in the match for me. Waller hit a diving elbow onto the announce table and used his henchman, Sanga to stand up. Waller won the match. Hopefully, this puts an end to this feud, but I highly doubt it.

“What are you and those butt implants gonna do about it?” ????#WWENXT @lashlegendwwe @nikkita_wwe pic.twitter.com/g23M9YgHTo

Lashing out was lacking entertainment

Last week Lash Legend after her disappointing match called out a superstar that was actually impressive in the likes of Nikkita Lyons. Lyons accepted the challenge and was also the special guest at ‘Lashing Out‘ with Lash Legend. Lash talked ill about Nikkita’s mom and that was pretty much it. Lyons was about to lash out but that was the end of the segment. Just when it was about to get interesting it was over.

In the little I have seen Nikkita, she has truly impressed me. But Lash Legend, on the other hand, I have seen a lot more of and she has been nothing more than a disappointment.

“What are you and those butt implants gonna do about it?” ????#WWENXT @lashlegendwwe @nikkita_wwe pic.twitter.com/g23M9YgHTo

Dakota Kai and Wendy Choo faced the team of Raquel Gonzales and Cora Jade. It was a really good match with a slight comic element with Wendy Choo. Gonzales and Jade looked to have the upper hand and were on the way to winning the match but Toxic Attraction had other plans. Gonzales was attacked by the NXT Women’s Tag Team Champions.

Dakota Kai capitalised and got the win.

To be honest, Team KC Square was impressive from the get-go with a lot of high-flying moves and almost took out 2 former NXT Women’s Champions.

Finally, Io Shirai hit the Moonsault and went on to win the match for her team. Seconds after that Mandy Rose was attacked by Cora Jade to get retribution for her tag partner Raquel Gonzales. It looks like Cora Jade might be getting one more shot at the NXT Women’s Title.

Safe to say @CoraJadeWWE did NOT take kindly to #ToxicAttraction‘s attack on her tag team partner! #WWENXT @WWE_MandyRose pic.twitter.com/44rJ74026s

Who attacked the Creed Brothers?

The Creed Brothers were set to face the Imperium for the NXT Tag Team Titles. Earlier in the night, the Creed Brothers were attacked in the parking lot. They were deemed unfit to compete. MSK replaced them. The tag team match turned out to be a disappointment but the mystery revolving around ‘who attacked the Creed Brothers‘ was interesting, to be honest. There were a lot of suspects starting from the tag champions. It could also be MSK or any of the teams that took part in the Dusty Cup.

We did not get a definitive answer but the Creed Brothers attacking both MSK and Imperium during the tag team title match, may have given us a clear indication that it was either one of those 2 teams.

Bron Breakker defended his NXT Title in a triple threat match against Tommaso Ciampa and Dolph Ziggler. The match had some great spots. All three were involved in a submission on each other. It was cool to watch and Breakker broke out of it.

Breakker was dominating the match. He hit Ziggler with a vicious spear.

Robert Roode showed up and cost Breakker the match. In the closing stages of the match, Roode pulled out Breakker allowing Ziggler to hit a Super-kick on Ciampa for the win. The whole arena was stunned in silence.

Dolph Ziggler is the first superstar who made his NXT debut after being an established star on the main roster and now has also won the NXT Title.

Another good episode of NXT 2.0.