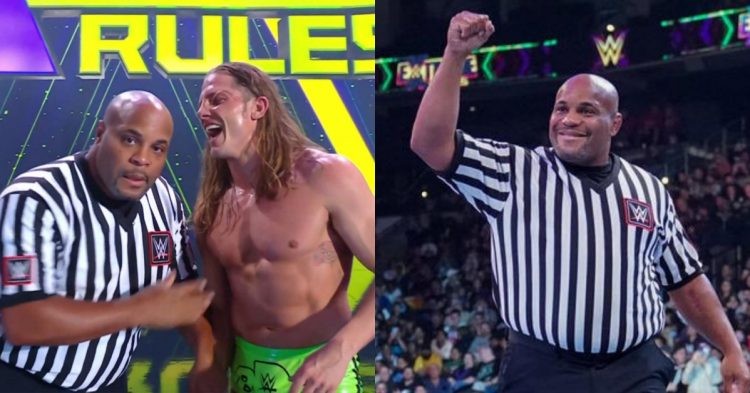 Former UFC double champ Daniel Cormier has finally made his WWE debut. However, it was not the debut that the fans thought it would be. Instead of competing inside the ring and getting into his fight gear, DC was in charge of the Extreme Rules main event match between Seth Rollins and Matt Riddle. Cormier did not tolerate any nonsense from either wrestler and finished the match fairly.

The feud between Seth Rollins and Matt Riddle was a personal one. In the build-up to this particular match, both cut fiery promos and the rivalry got quite heated as both referenced their personal lives. Hence, there was every possibility that the contest could have gone off the rails quite soon. However, Daniel Cormier conducted the match with a stern hand.

But that does not mean that there were not moments when both wrestlers got quite angry at DC. While Rollins was quite often out of the line, it was surprising when Matt Riddle lost his temper and charged at DC.

Both Cormier and Riddle have a history in Mixed Martial Arts (MMA) and have fought in the UFC. However, after receiving a warning from DC, Matt came back to his senses. Riddle could be immediately heard saying, “I am sorry,” to the former UFC heavyweight champion and Hall of Famer. Riddle went on to win the match against Rollins.

It is no secret that Daniel Cormier was a big pro-wrestling fan growing up. After his KO win over Stipe Miocic at UFC 226, Brock Lesnar came inside the Octagon to issue him a challenge. Lesnar, who was a former UFC heavyweight champ himself, pushed DC inside the Octagon and broke a camera. Although it could be perceived as disrespectful, DC described it as his ‘WrestleMania moment.’

Earlier in the year, Cormier revealed that WWE contacted him previously to work for the company as an NXT commentator. However, it obviously did not happen. Hence, the 43-year-old could not refuse the chance to officiate a match at Extreme Rules. How did his current boss, the UFC President Dana White react when DC broke the news of the WWE offer to him? Dana was apparently very supportive of it.

Do you think it was just a one-off appearance in the WWE for Daniel Cormier? Or is this the company’s way to introduce the UFC legend to the audiences? Let us know in the comments down below.