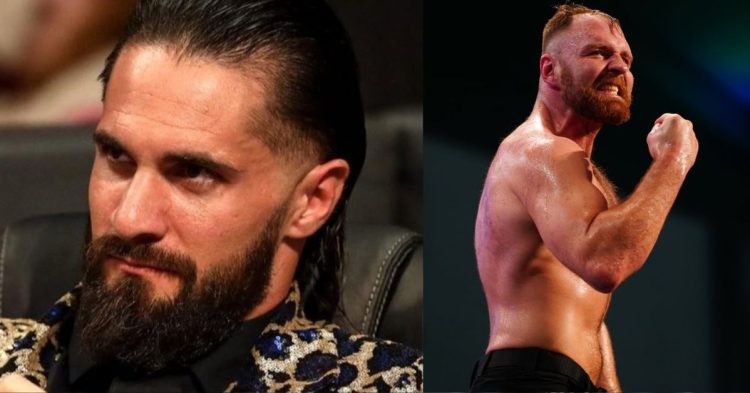 In 2012, “The Shield,” which included Roman Reigns, Seth Rollins, and current AEW Champion Jon Moxley, was a part of the WWE main roster. All three Superstars in the stable saw respective statuses significantly rise as it went on to become one of the most prominent and well-known stables in WWE history. From their time spent together, all three went on to win Grand Slam titles in the WWE. Moxley, who made the headlines for his frequent criticism of WWE, departed the WWE in 2019 to join AEW. Rollins in his recent interview with Ariel Helwani for BT Sport explained his relationship with his former stablemate and talks about his success after departing from WWE.

After being asked whether their relationship changed Seth Rollins had this to say: “I don’t talk to him as much, obviously. We have opposite schedules and different stuff, but our baby girls are close to the same age. And he’s not much of a texter like he’s an in-person cat. He’s not much of a texter or a phone guy, he’s an in-person dude. So, if there’s ever a chance when we were in Cincinnati last time I was there I popped in the house to say ‘Hi’ and all that, checked in on him. I do that periodically just to see how he’s doing and stuff, but I’m close with Renee [Paquette], so we are always exchanging baby pictures and what is new with the kids.”

After shifting from WWE Jon has seen a lot of success in AEW and independent wrestling promotions too. Jon is currently the AEW Champion and is the only person to hold the title 3 times. When Rollins was asked about how he feels about Jon’s success outside WWE, this is what he said, “Yeah, never any animosity. He’s great, he’s at the top of his game doing his thing over in AEW. So, nothing but the best. I’ve never, between the three of us [Rollins, Moxley, Roman Reigns], and I can’t speak for any of them, but they were closer than I was with either of those guys as friends off camera. So I assume that they are still chill. I’ve never heard anything to the contrary, but yeah, I’ve always had a great relationship with those guys.”

WWE Superstar Seth Rollins talked about being Roman Reigns’ shadow in a conversation with Ariel Helwani that was posted on the BT Sport YouTube channel.

"Even when I won the title at #WrestleMania, I still felt like I was second fiddle to Roman Reigns."

This is the side of @WWERollins you rarely see.

From The Shield to @BeckyLynchWWE and everything in between. This episode of #ArielMeets is not to be missed.

Rollins explained: “Even when I had won the title at WrestleMania, cashed in, great moment, I still felt like I was second fiddle to Roman [Reigns]. I still felt like he was the guy. You’re the placeholder until he’s totally ready and we’re totally ready to put the ball in his hands, but for now, you’re a step ahead so we’re going to give you this – and then we’ll move on to what we really want to be, but it’s just going to take a few months.”

Rollins continued by suggesting that he might be unlucky to be living in the Roman Reigns era and naming some other notable figures from WWE history who had a certain pecking order for who the top guy was: “I often wonder if it is because I live in the Roman era that it’s just never going to happen. The only time I was even considered for the main event of WrestleMania was when Roman got Leukemia. He was out from August till January or February and I was second behind in the little babyface column there and so, I got slotted in. I feel like it’s one of those things.”

He further added “The best I can hope for is to be the Edge to his Cena or the Savage to his Hogan. Sometimes I just feel like that’s just the way the cookie crumbles. That doesn’t mean I don’t think that I’m better than he is or that I can perform or that I can draw at that level. I certainly think all those things but it’s not my sandbox. I don’t make those decisions.”