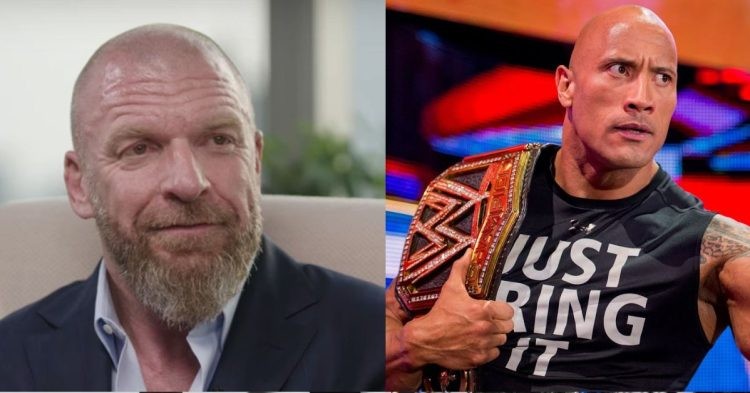 Dwayne “The Rock” Johnson is one of the biggest Hollywood stars right now. His transition from a pro-wrestler to a movie star is credited to his Mic skills and Charisma in WWE. The Rock is now a full-time Hollywood actor but deep inside he still wants to lace up a pair of wrestling boots and perform for ‘millions and millions of Rock fans.

The Rock’s potential final appearance at WrestleMania was one of several topics that Triple H discussed in an interview with BT Sport’s Ariel Helwani. The Rock has talked about his desire to return to the Squared Circle one more time before hanging up his boots. WWE’s biggest Live Event “Wrestlemania” would set a perfect stage for the return of the most electrifying man in sports entertainment.

It has been rumored that a potential dream match between “The head of the Table’ Roman Reigns and “The great one” The Rock will be the main event of  WrestleMania 39. Triple H the new head of Creative of WWE was asked in his Interview for BT Sports about it and Hunter said :

“I know somewhere deep inside of him there is that burning thing to go, ‘I gotta feel that one more time, gotta get in there one more time because that clock is ticking,”

“The time is running out. So, if there is a time, it is now, and I am certain that he is eager to seize the opportunity. It just depends on whether he can manage all the other things so that he can concentrate on that for long enough for us to finish.”

Triple H on “Roman Reigns VS The Rock” at WrestleMania 39

The Rock would like to experience the rush of entering the ring once more, everything that denotes the journey at a show like WrestleMania, and performing in front of a large audience on stage and millions of viewers at home, according to Triple H.

Roman Reigns, Dwayne Johnson’s actual cousin, was suggested by Triple H as the ideal candidate because of his lengthy championship reigns within the industry and the public’s interest in seeing them in the ring. The Rock will only have to decide whether to embrace Triple H’s plan and make his way back to the ring.

Roman Reigns is established as the Biggest Heel in the Company right now and has been represented as an unstoppable force. The Rock’s return would definitely hype up the WWE universe and establish him as Babyface. After adapting the character of “The Head of the Table” and aligning himself with his real-life Cousins Jimmy and Jay “The Usos” and forming the stable “The Bloodline”, it would make a perfect story-line for The Rock to return and Face Roman at the Grandest Stage of All.