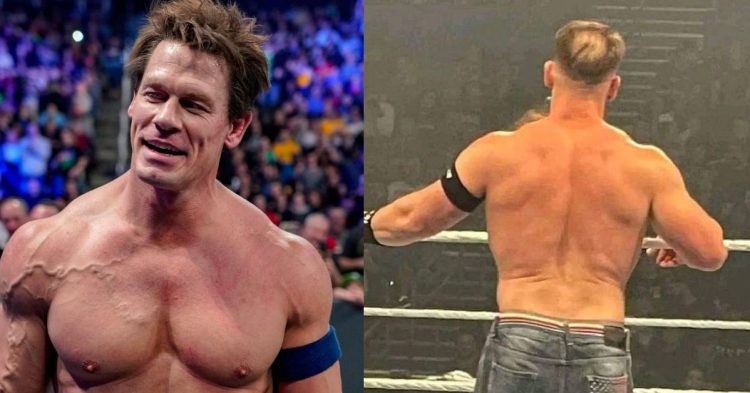 John Cena had a visible bald spot during his return match on the last SmackDown (Credits: Twitter)

On the most recent episode of SmackDown, the GOAT John Cena returned to the ring after almost a year. Cena and Kevin Owens defeated Roman Reigns and Sami Zayn of The Bloodline.

Wrestling GOAT turned actor was concerned about needing to grow out his short hair for a new movie role because he’s been “extremely self-conscious” about his thinning hair.

In an interview, Cena said that he was pretty concerned about his thinning hair and was not comfortable growing out his hair for the movie ‘Project X-traction’ alongside Jackie Chan. Cena said “I’m very self-conscious about my hair, it’s very thin and it’s run away from me at the top (starting to develop a receding hairline), but I’m like, ‘It’s OK, it’s fine. I’ll do it, embrace the uncomfortable.’”

Cena continues explaining why his new look kind of ruined a lot of people’s childhood, “Then I showed up to wrestle (in Australia) with this haircut, and it’s like, I ruined everyone’s childhood!”

WWE fans are familiar with Cena’s short haircut. For most of his WWE career, he donned a crew cut, and fans were outraged that the icon of the Attitude Era and the PG era of WWE had such a drastic change in appearance.

For the first time in 2022, John Cena made a spectacular return to the WWE ring. He teamed with Kevin Owens to beat the Tribal Chief Roman Reigns and Sami Zayn. When the 16-time World Champion’s theme song played and Cena appeared, the WWE Universe erupted. Although Cena’s return was fantastic, it was marred when a photo of him sporting a bald spot went viral.

john cena’s bald spot was the most exciting WWE debut of 2023 pic.twitter.com/WpIRkNnpX2

Highlight of #Smackdown for me was seeing the beautiful age progression of John Cena. Wonderful yet spectacular bald spot. pic.twitter.com/YcQYFAir31

People joked about John Cena’s bald spot in the comments section, while others defended the 16-time world champion. Many followers were saddened to find their childhood hero balding and showing signs of aging.

John Cena has carried WWE for nearly a decade and has become a pop culture icon. Such trolls will never be able to destroy the legacy that this man has established, and no matter how much hate is directed at him, he will simply “Never Give Up.”