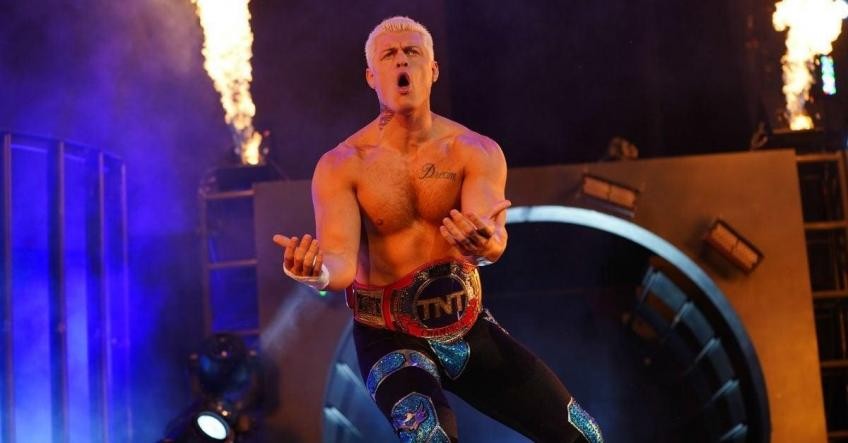 Cody Rhodes has been the biggest name in the world of wrestling since departing from AEW earlier this year. The American Nightmare has been heavily-linked with a move back to the WWE, but that might be changing for the worse if recent reports are to be believed.

I’d encourage you to still watch it – I was very lucky that my hard work led me to be that face, but I wasn’t alone

Nick/Matt/Kenny/Chicken/Jericho/MJF/Hang were as well, and all the new girls and guys putting in a shift now as well

Sounds weird, right? Cody was TNT Champion as recently as January 26th, and he held that title without having a contract with AEW! After dropping the strap to Sammy Geuvara at AEW’s Beach Break Special, Cody just disappeared from TV.

3 weeks later, he would no longer be with the company.

It was a seismic shift in the wrestling landscape. Cody was AEW’s standard-bearer and suddenly, he’s no longer with the company. Paul Heyman thinks it’s because he wasn’t appreciated enough, as you can see in this clip below.

Whatever the case is, The American Nightmare has been heavily linked with a WWE return ever since. And what seemed impossible eventually became inevitable! PWI’s Mike Johnson revealed that Cody had already signed with WWE and is expected to make a Hardy Boyz-esque return at ‘Mania 38. But that might end up not happening.

In an interview with Denise Salcedo, Dave Meltzer of the Wrestling Observer Newsletter revealed that “sources close to Cody” believe he might just pull out of ‘Mania. While no clear reason for this has been given, Meltzer expanded upon the situation by pointing out that WWE had booked themselves into a corner. He said,

“Depending on who it is, it better be somebody good because…everyone expects it and they kind of have to deliver it I suppose. If it’s not him, it’s his choosing, it’s not theirs. They believe it’s him. They believe that’s the guy. If for whatever reason he backs out because he’s going to back out, I don’t expect that to happen, but I know people close to him who do so what the hell. We’ll have to see how it plays out.”

If this is true, then one of the biggest anticipated WrestleMania moments in modern history will quickly turn into a nightmare for WWE (no pun intended). Cody Rhodes returning to WWE has been such a hot prospect that Becky Lynch had to step in and explain those crowd chants this Monday to an interviewer! (more on that, here.)

I did not deserve this.

Here’s hoping this is all a massive work; because if there’s one person who loves trolling the fans, it’s Vince McMahon.