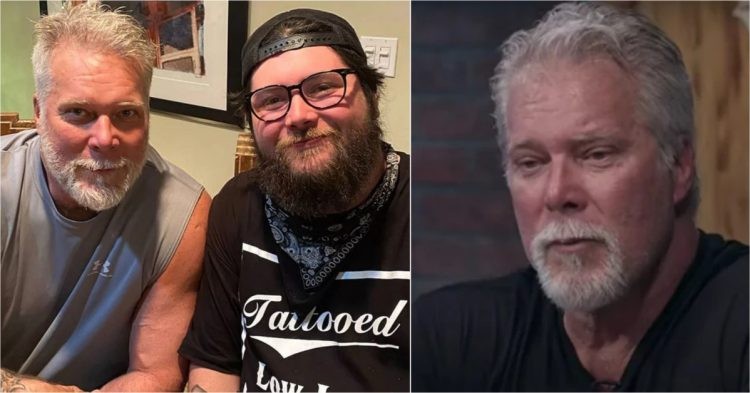 Kevin Nash, a WWE Hall of Famer, made some troubling remarks, implying that he was thinking about suicide after his son Tristen died in October 2022 at the age of 26.

"Don't play like that. You have guns so you can't say those things."

"I can do whatever the fuck I wanna do. Long as I leave a note." pic.twitter.com/dtM0TxCQQ0

Following the three-month anniversary of his son’s tragic death, WWE legend Kevin Nash seems to be going through an emotionally dark phase, raising concerns that the six-time world champion is having suicidal thoughts. The 63-year-old wrestler lost his young son Tristen, 26, in October 2022 after he suffered seizures and fell into cardiac arrest, which doctors suspect were caused by stopping alcohol, as per Nash.

Nash made some disturbing words on the most recent episode of his KLIQ THIS podcast, hinting at suicidal thoughts. “Today is week 12 that I lost my boy,” he said, adding, “Time flies when you’ve got a gun in your mouth — I mean, time flies when you’re having fun.”

Sean Oliver the co-host said, “Don’t play like that,  You have guns, so you can’t say those things,”. Nash replied, “I can do anything the f-k I want,  So long as I leave a letter.”

Nash later said on the show that he had sad thoughts about his son’s death every day. “Every morning when I wake up, the first thing that happens is, I come to the realization that instead of there being three human beings in my home, there’s now two,” Nash said.

Nash has gone through a lot; his best friend Scott Hall died, and his son tragically died at a young age. Nash is a strong individual, and hearing him speak in this way has caused alarm in the wrestling community.

How did Kevin Nash’s Son Die

Kevin Nash, a former WWE star and Hall of Famer, stated that his 26-year-old son died in October of last year as a consequence of a seizure that led to cardiac arrest.

Tristen, who had just been working on his dad’s podcast, died from a cardiac arrest caused by an alcohol withdrawal seizure, according to Kevin Nash. He reminisced on his son Tristen’s life and the cause of his death on the “Kliq This” podcast, which was released on Oct. 24, four days after the family announced Tristen’s death.

Nash said, “The seizure caused a cardiac arrest, He was basically dead in his room on the floor with the EMT working on him. They got him back and got him in the ambulance, and tried to save his life.”

Kevin Nash is a legend in the pro-wrestling world and a pop-culture icon along with the NWO. Many aspiring tall young wrestlers look up to him and are inspired by his “Big Daddy Cool” persona. Seeing him go through this difficult period has concerned his admirers, who have wished him well and advised him to take care of himself.