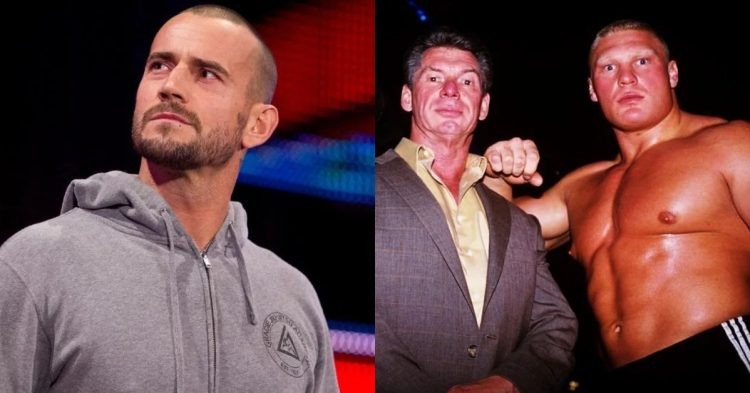 According to the former AEW and WWE Champion CM Punk, Vince McMahon is biased against Brock Lesnar. CM Punk revealed his thoughts on McMahon’s retirement, Sasha Banks and Naiomi’s walkout, and much more while talking with the Absolute Geek podcast at Comic-Con.

As previously stated, in an interview with the “Absolute Geek” podcast, CM Punk linked WWE’s handling of Banks and Naomi’s walkouts to Brock Lesnar’s. Sasha Banks and Naomi left WWE last year due to the general course of the women’s tag division’s booking. In an official statement from the company, they forfeited their tag titles, were indefinitely suspended, and were called unprofessional.

Punk said that he doesn’t know Banks personally, but given his own turbulent experience with the promotion, he is solidly on her side. Punk said, “I’ll put it to you like this – people are going to be real f*cking mad about this, but f*ck it,” Punk said. “Mercedes and Trinity [Naomi] leave, and they announce on SmackDown that ‘Gosh darn, we’re so disappointed in them, they really let our fans down.”

Punk then compares the situation to Lesnar’s walkout by saying,  “Brock splits, comes back obviously, I think he worked the show, but where was Michael Cole saying ‘Man, Brock Lesnar really let these fans down?”

Then he compares his walkout from WWE in 2014 to the situation stating, “I walked out, they went on TV and they called me a quitter. What’s changed?”

Vince is a major supporter of Lesnar and has a father-son relationship with him, so he may have been slightly biased in the case.

Why did CM Punk walk out of WWE?

CM Punk drifted away from WWE in 2014 because he was unhappy with his booking and after being deceived by WWE and possibly dying as a result of a misdiagnosed injury.

CM Punk left the WWE in 2014 for a variety of reasons, including burnout and a lack of motivation. He also claimed to feel creatively limited and battling with bodily concerns, among other things, in a podcast after leaving the organization. Punk quit WWE the day after the Royal Rumble pay-per-view in January.

Punk chose to leave WWE due to his health, according to Media Referee. Punk suffered numerous injuries over the years, keeping him from performing to his full capacity. While at the same time, the superstar felt obligated to present the audience with an exciting performance to see.

In 2014, during the Raw episode following the Royal Rumble, CM Punk walked out of the arena. He walked out because he had a concussion earlier that night as a result of the botched move by Kofi Kingston.

Terrance McKinney vs Ismael Bonfim Prediction: Who Wins at UFC 283?