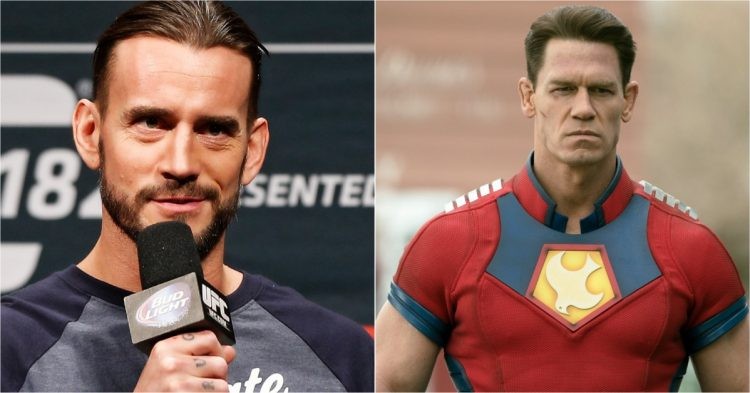 CM Punk praised WWE Superstar John Cena’s acting abilities, saying the Peacemaker star is “crushing it” in Hollywood and “he is not surprised”.

CM Punk made an appearance on ET Canada and was seen admiring his old WWE rival. Punk expressed his appreciation for Cena’s excellent acting skills and remarked that he was not surprised.

“One hundred percent [I’m impressed], but I’m also not surprised,” Punk says. Punk then continues saying, “I believe many people confuse the two. You see someone like Dave Bautista crushing it in a variety of positions. Dave can do humor, drama, and anything in between. Cena has always been the funny one.”

Punk then explains why he always knew Cena was a good actor and thought he will make a good actor in Hollywood. Punk said “Cena has always been that funny guy. I always thought that behind the scenes, and I think anybody who has worked with him always thought it.”

He then says all wrestlers are an actor in some way and explains it further. “A lot of the guys at that top level in WWE may not want to admit it, but all we are are theatre actors. We’re doing live theatre every Monday, Friday, Thursday, and Tuesday, depending on what the hell the schedule is right now. That’s all there is to it. It gets you used to improvising and adapting on the spot.”

John Cena has evolved from a WWE superstar to a Hollywood celebrity. After nearly 20 years of service to WWE, Cena is finally receiving the appreciation he has always deserved. His WWE colleagues and admirers are delighted. From starring in the above-mentioned “Peacemaker” to appearing in the 9th entry in the “Fast and Furious” franchise, Cena has become a massive star.

Are John Cena and CM Punk friends in real life?

Although there is no official evidence of a friendship between CM Punk and John Cena, it is widely assumed that the two former WWE Champions are on excellent terms.

CM Punk is one of the very few who were as popular as John Cena for several months at a time, which is no minor feat. Punk and Cena shared one of the best feuds in WWE history, but that was all kayfabe because they get along really well in real life.

They had their disagreements at first and kept their distance. But after spending so much time together on the road and having storylines together, they grew an excellent friendship. There is nothing but respect between them, as it should be. Despite their dramatically different personalities, they became friends due to their mutual respect and cooperation as two of the industry’s top talents.

Although according to HHH CM Punk is a “Weird guy,” Punk managed to grow friendships with the face that runs the place.

So what do you make of the comments from CM Punk about John Cena’s acting capabilities? Let us know in the comments down below.