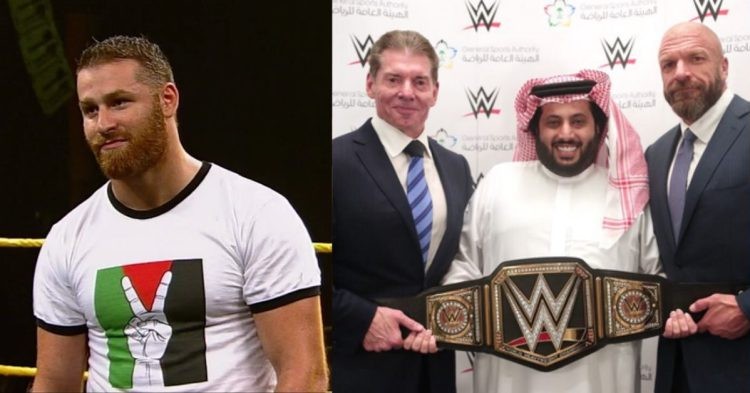 Sami Zayn will leave the WWE if the rumors of Saudi Arabia buying WWE are true (Credits: Wrestling Inc)

The news comes only hours after Stephanie McMahon announced her retirement as Chairwoman and Co-CEO, and a WWE press release stated that Vince McMahon had been unanimously voted as Executive Chairman of the Board.

The sale has yet to go through formal channels, but they have decided to sell the company in principle. Although no talent has requested their release, there have been reports that some performers within WWE would be fired if this occurred. With Vince McMahon back in charge, there has been a tremendous amount of concern among employees and talent.

If the sale goes through, Sami Zayn will be the first to quit the company. Because of his Syrian ancestry, Sami Zayn has been unable to appear in WWE events in Saudi Arabia. Saudi Arabia’s government has been involved in an ongoing civil conflict in Syria and has been a strong supporter of the opposition to Syrian President Bashar al-Assad.

Why is Sami Zayn against WWE shows in Saudi Arabia?

Sami Zayn is an essential member of the WWE roster. Except for events in Saudi Arabia, he appears in the majority of events and pay-per-views. This is not due to a lack of storylines for him in WWE, but rather to Sami’s decision to avoid the country.

The Wrestling Observer Newsletter stated in 2019 that Saudi Arabia barred Sami Zayn from entering the nation because of his Syrian ethnicity. Sami Zayn was brought up in Canada but now resides in the United States, mainly in Orlando, Florida. His ethnic background, however, is Syrian, as both of his parents are Syrian immigrants.

Relations between the two nations have been tense, particularly since the Syrian Civil War. The Saudi government has been accused of funding rebels seeking to depose an Alawite, Syrian President Bashar Al-Assad. As a result, Sami Zayn is not allowed to travel to Saudi Arabia because he is a Syrian Muslim. For the same reason, he was not permitted to attend the Greatest Royal Rumble event.

Sami established the Sami for Syria Fund in the summer of 2007 in collaboration with the Syrian American Medical Society to offer life-saving medical care to conflict-affected populations in Syria. Sami Zayn has done great work for a country where nearly 80% of the people live in poverty. What lies ahead for him in WWE after the landmark deal with Saudi Arabia? Only time will tell.