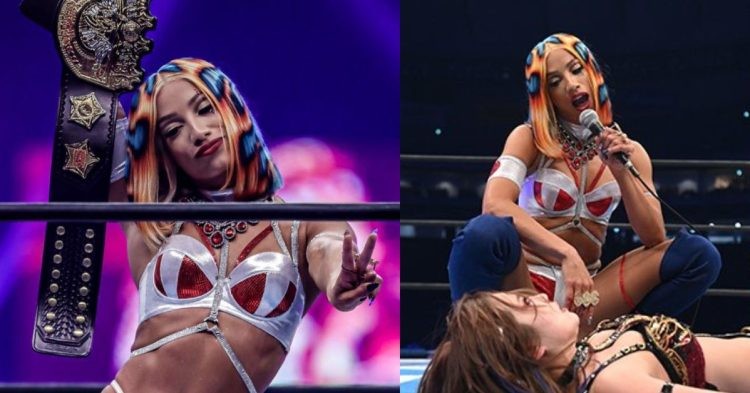 Moné attacked the champion KAIRI after she successfully defended the IWGP Women’s Championship vs Tam Nakano at Wrestle Kingdom 17. After beating KAIRI, Moné announced herself as “The CEO” and stated that she would be attending the champion at NJPW Battle in the Valley on February 18 in San Jose, CA.

Mercedes Varnado thanked multiple individuals who inspired her life and her career in a series of tweets earlier today. She thanked WWE, Triple H, Vince McMahon, William Regal, the WWE Universe, her fans, and Sasha Banks individually on Twitter.

Banks’ appearance inside the Tokyo Dome is her first appearance inside a ring after she and Naomi walked out of “WWE Raw” in May 2022. After the departure, there was uncertainty regarding her wrestling future. Mercedes’ move to drop the champ wasn’t really clean, and she appeared hesitant to make her first promo after almost seven months.

On Day 1 of Wrestle Kingdom 17, former WWE Superstar Sasha Banks made a historic NJPW debut as Mercedes Moné. She challenged IWGP Women’s Champion Kairi to a match at the forthcoming Battle in the Valley show in February.

This is what I want! #wk17 #njpw #STARDOM pic.twitter.com/P7OnKqbQSW

Fans are overjoyed to see the former WWE Women’s Tag Team champion return to the ring. Despite the fact that few fans have voiced their support online, some have criticized her for botching her very first move in the promotion.

With this beautiful botch, Mercedes Mone aka Sasha Banks is destined to be #allelite #AEW #gamechanger #njpwworld #WRESTLEKINGDOM17 😭😭😭 pic.twitter.com/2h2xrlV4lS

ngl the hair dye reminds me of tyler the creator#MercedesMone pic.twitter.com/Omk6wf29ce

Her followers are delighted to have Sasha back, and they have showered her with tweets, making the hashtag #MercedesMone trend worldwide.

My GOAT. My love. My queen. She’s going to SOAR and do wonders for @njpwworld and @wwr_stardom’s Women’s division. She’s making her dreams come true and UNAPOLOGETICALLY knowing her worth.

Mone will face IWGP Women’s Champion Kairi at the Battle in the Valley event in February. We hope she can live up to the hype surrounding her name and put her haters to rest.