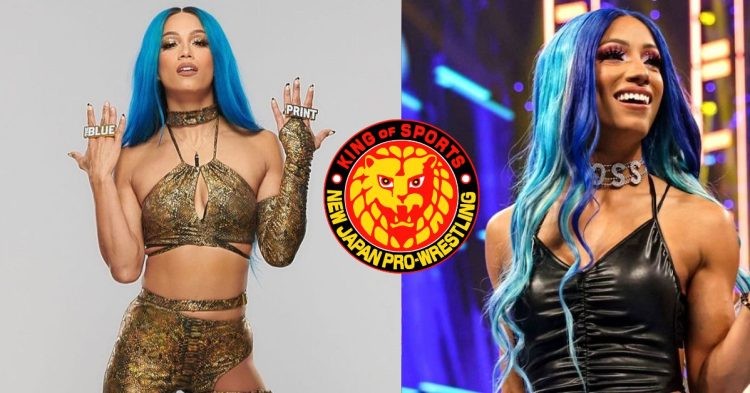 According to PWInsider, Mercedes Varnado a.k.a Sasha Banks will appear at NJPW Wrestle Kingdom 17 on January 4th, 2023. While it is unknown if Banks will make an appearance in front of a live audience, a recent report from PWInsider claims that NJPW is bringing Sasha to the Tokyo Dome.

Sasha has been hinting at a potential return to the ring over the past few months by posting images and short videos of her training out in the ring. She was rumored to be planning to wrestle again when more images and videos surfaced, although it was unclear for what promotion.

She and her tag team partner Naomi last appeared on WWE television when they left a May episode of “WWE RAW” due to creative decisions and the way their Women’s Tag Team Championships were handled.

The new IWGP Women’s Championship will be defended at Wrestle Kingdom 17; the very first champion, KAIRI, better known to WWE fans as Kairi Sane, will defend her title against Tam Nakano. Sasha and Kairi had a brief history together in the WWE, and if Sasha had signed a full-time contract with NJPW, this could become a storyline.

Could this be related to the recent alliance between WWE and NJPW, or has Sasha decided to leave WWE altogether and join NJPW? Possibly, we will have to wait for the story to unfold.

After the news broke out that Sasha bank will appear at NJPW’s Wrestle Kingdom 17 on the 4th of January 2023 at the historic Tokyo Dome, fans have had mixed reactions to the news. Mercedes Varnado, a.k.a Sasha Banks has been teasing an in-ring return for a long time now. Few fans are happy that Banks is finally making a return but few fans have called out her for joining NJPW over WWE.

She'd get exposed if she wrestled. She's a show-woman, not a technician. She lacks brutality of an Asuka and the pure athleticism of a Charlotte. Hope she returns to WWE where she actually shines at.

The technical pro wrestlers in New Japan Pro-Wrestling are regarded as some of the best in the world. Due to her lack of in-ring ability, Sasha Banks most definitely does not fit within that window.

SASHA BANKS WRESTLING IN JAPAN????? She really said let me go get a five star match before I get back to the WWE pic.twitter.com/YNuRYm0pAS

Sasha Banks living out all her dreams 👑 pic.twitter.com/5UliE5PZSt

They don't need her. She walked out on them and they have lots of talent to work with. Just let her be where she is and wants to go. Good luck Sasha. We have moved on ….

We may be getting Sasha Banks vs Kairi Sane in 2023 😭 pic.twitter.com/STVjczMpz7

Many fans are also upset that she chose not to join WWE again and team up with Triple H under his new management. The success of the WWE Women’s division is credited to Triple H, and Sasha Banks had a significant role in it. Although it is not confirmed whether she signed with NJPW, we might have to wait until Wrestle Kingdom 17 for more updates.