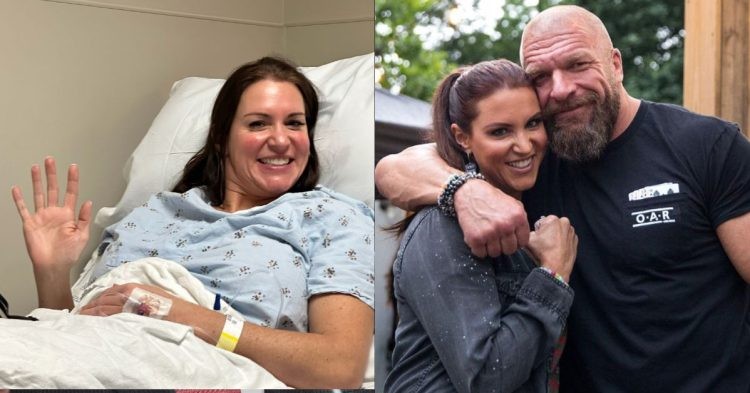 Stephanie McMahon shared that she has been recovering from an ankle injury (Credits: Twitter)

Stephanie McMahon has undergone ankle surgery just days after departing from WWE. Stephanie posted a picture of herself in a medical gown, smiling and waving to the camera, with another of her leg in a cast.

Former WWE Chairwoman stated on Twitter earlier this week that she has resigned as WWE’s co-CEO. The announcement follows Vince McMahon’s return to the organization as Executive Chairman.

Stephanie disclosed in her most recent tweet that she is currently healing from an ankle injury. She shared photos from her hospital bed and expressed gratitude to her husband, Paul “Triple H” Levesque, who remains on the WWE management team as chief content officer, overseeing creative, talent relations, live events, and more. Stephanie hasn’t yet revealed the nature of her injury.

Busy week! Thank you Dr. Waldrop, @AndrewsSportMed and the Orthopaedic Center Staff for fixing my ankle! And to Kevin Wilk @ChampionSportsM for already getting me started on rehab! (And of course to my amazing caregiver @TripleH ❤️) #RoadtoRecovery pic.twitter.com/s8v3rtqqRs

Stephanie McMahon resigned as WWE’s Co-Ceo and Chairwoman just a week after her father, Vince McMahon, returned to the company. In July 2022, Vince was under investigation for alleged sexual misconduct and hush money payments and was forced to resign as WWE Chairman.

The news of WWE being sold to Saudi Arabia broke shortly after Stephanie announced her resignation. Despite the fact that there have been no legitimate proofs to back up the news.

Fans are speculating if Stephanie resigned due to the injury or if it was influenced by her father’s return. The WWE locker room is also feeling the impact of Vince’s return, with reports claiming that morale has dropped.

Although Triple H, who is now the Head of Creative , spoke with WWE talent before Friday night’s SmackDown and tried to clarify things. According to some sources, Triple H is still in charge of the creative and will most likely make the final decisions.

The WWE Universe responded to Stephanie’s departure with an expression of love and support. Numerous WWE Superstars as well as other wrestlers expressed their heartfelt disappointment at her resignation. Her most recent update was no exception, as fans and WWE Superstars went to the comment section to wish her a swift recovery.

🙏🏻 to you boss lady. Us fans wish you was still #CEO of #WWE. You an #HHH had it rolling. But what your future holds “We” all support you. Speedy recovery! #WWE #BossLady

Gutted you’ve left @WWE #WWE Stephanie, thank you for all your hard work and what you did for us Fans.

Have a speedy recovery, enjoy @TripleH waiting on you hand and foot literally and enjoy more time with your Daughters! x

Stephanie McMahon has had a hectic few months after her father retired and was made WWE’s Chairwoman, only to leave after 8 months. Stephanie has always had the support and love of the WWE universe.

She carried the company well through the dark days and eventually got over the tough times. She and her husband “The King of Kings” brought a new WWE to millions of fans all over the world. We wish The Queen of Queens a speedy recovery.