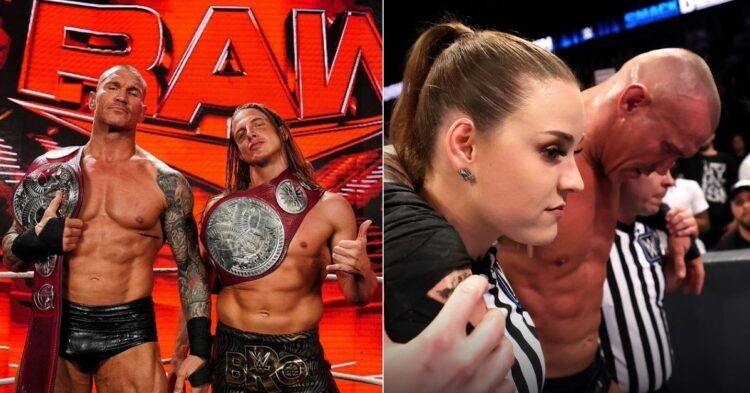 Former RAW Tag Team Champions RK-Bro lost the Tag Team Title Unification match against The Usos on the May 20th episode of SmackDown earlier this month. Randy Orton and Riddle both suffered a beatdown at the hand of The Bloodline and were reported to have undergone medical evaluation.

While Riddle is actively performing as a singles competitor, Orton has been absent from WWE television since their championship match. WWE has provided an update regarding the Viper’s injury status.

WWE announced on SmackDown on Friday that Randy Orton has consulted with some neurosurgeons and orthopedic spine surgeons to gather information on the extent and severity of his injury. Riddle appeared in a promo segment last week on RAW and also informed the WWE Universe about Orton’s problems dealing with back issues.

It is still unknown whether the injury is legitimate or a part of a storyline. But Randy Orton is known to take time off from the ring now and then. WWE’s update wasn’t very informative but the nature of the injury look quite serious.

When will Randy Orton return to the WWE ring?

It has been reported that Randy Orton signed a new deal with WWE and will work fewer dates than usual. Given that serious nature of the injury, Randy Orton is unlikely to return to the ring in the foreseeable future. But there are big plans for the 14-time WWE Champion after his return to the ring.

WWE hasn’t cleared Orton to return and it is highly uncertain if he will return by the time the build-up to SummerSlam begins. The Viper still has a prominent place in WWE TV even after 20 years in the company and continues to make his presence felt inside the WWE ring with every passing day.