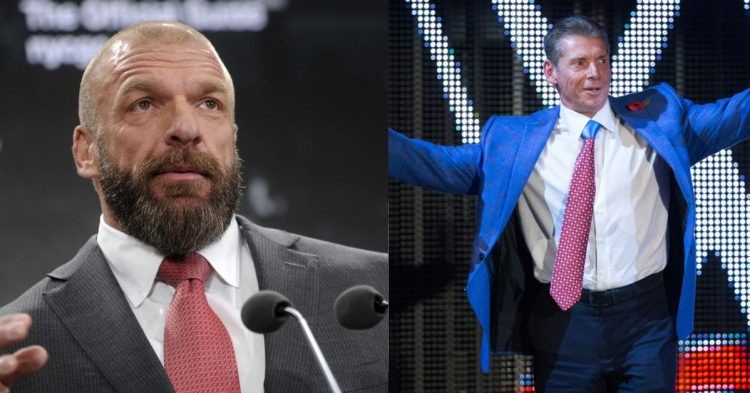 During a briefing before Friday’s SmackDown, Triple H allegedly told talent that regardless of the return of Vince McMahon to the WWW he will remain the company’s creative director and talked about a potential future sale of the promotion.

Before last night’s episode of Smackdown, a WWE talent meeting was held in Green Bay. PWInsider and Fightful Select have published reports on what was stated at those meetings.

According to the PWInsider report, WWE Chief Operating Officer Paul “Triple H” Levesque stated that Vince McMahon’s return to WWE was done to lead the search for a buyer for the company. According to Fightful Select, Triple H also attempted to dismiss the story of the WWE sale, stating that even if it was completed, it would take much longer for anything to become official or disclosed.

The creative process is not supposed to change with Vince McMahon back in the company, WWE tells @FightfulSelect directly and specifically. https://t.co/jy8u4a7WDa will have more. pic.twitter.com/8KPb0pgHq4

According to Triple H, none of this will have any influence on the current WWE creative team or workflow. This is said to have relieved many of the fears that the talent had over the last few weeks. He did leave the door open and said that anything might happen, but for the time being, Vince leaves the final creative decisions to Triple H. Although he and Vince McMahon may get into a discussion, Triple H makes the final decision.

McMahon returned to the board of directors last week after retiring as chairman, CEO, and head of creative in July following a board of directors investigation into him paying millions of dollars in hush money and alleged sexual misconduct.

How much would Vince McMahon seek for WWE?

Following Stephanie McMahon’s recent departure as co-CEO of WWE, speculations of a sale of the corporation to Saudi Arabia have surfaced, although nothing has yet been confirmed. But what if Vince had sold WWE this week? How much revenue would he have wanted in a sale?

Wrestling Observer Newsletter‘s Dave Meltzer provided an estimate based on his understanding of the current market. “Analysts have noted Comcast, worth $164 billion, would have the capability of pulling off a deal that analysts are estimating would cost $7.4 billion to $8.2 billion, with others saying WWE is hoping for $8.5 billion. Saudi Arabia, Amazon Prime, Disney, and Netflix would as well. Endeavor or the Khan Family would need to work with other business partners, as Endeavor did with its purchase of UFC.”

It is still unclear whether Vince has already committed to selling the company or is still looking for the right opportunity. We may have to wait and see what the future holds for the WWE and its superstars and fans.