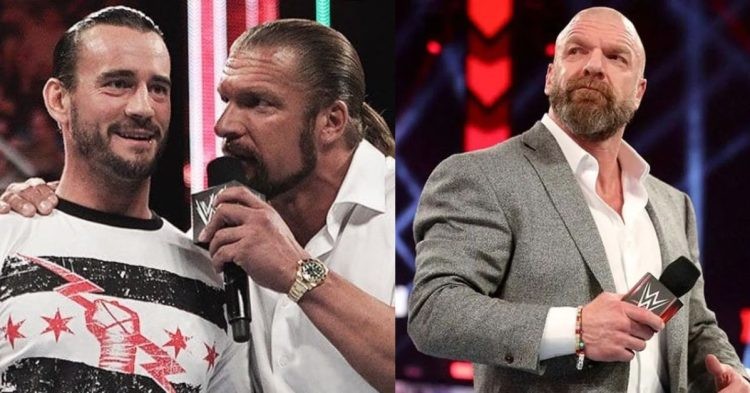 Triple H open up about the possibility of CM Punk returning to the WWE (Credits: InsideSport.in)

Triple H has finally responded to one of the internet’s burning questions: would he allow CM Punk to return to the WWE and perform alongside him? CM Punk has stated numerous times that he has no intention of working with WWE in any manner, but has ironically returned to WWE’s FOX show.

In an interview, Triple H was asked whether there is any chance of CM Punk returning to the biggest promotion in the World, to which hunter had a very diplomatic answer.

Hunter said, “I don’t think there is anyone in the business if they called and I wouldn’t take their phone call.”Then he goes on to say, “CM Punk worked with us on the FOX show, a year ago and there were opportunities there. You know I’ll never say never but the desires need to be there on all sides”

According to Fightful.com, Punk’s possibilities remain open under Triple H’s supervision. Sources close to WWE confirmed on the record that the new Triple H regime in charge would be open to “anything within reason” for decent money, creativity, and situation.

Punk left WWE in January 2014 and was released officially in June of that year. Following that, Punk disappeared from the wrestling ring for a duration of seven years until his comeback to the sport in AEW in August of 2021. In the past, he has not been overly enthusiastic about his tenure with WWE.

Fans are well aware of Triple H and CM Punk’s feud, but the question remains whether the two men can put their differences aside and work together again.

CM Punk is rumored to be leaving All Elite Wrestling after a physical altercation with The Elite during the All Out media scrum. However, WWE may be interested in bringing back “The Best in the World.”

According to one WWE source “Triple H wants to be a success and make compelling programming more than anything.

CM Punk back in WWE is compelling programming, but I can't see it being a full-time deal like what he has in AEW,”

Fightful Select has disclosed how certain WWE backstage employees feel about the extraordinary circumstance involving the Chicago-made Punk’s uncertain future. Triple H is supposed to be hell-bent on delivering entertaining programming, and Punk’s comeback could help them do so.

However, now that things are public and it has been discovered in the investigation that Punk was reportedly a toxic member of the AEW locker room, things may not go as planned.

Triple H would never compromise the morale of his locker room merely to bring back a 44-year-old. Triple H has certainly brought back many fired superstars to WWE, but the talent backstage may be disappointed to see Punk return after all the chaos he caused in AEW.