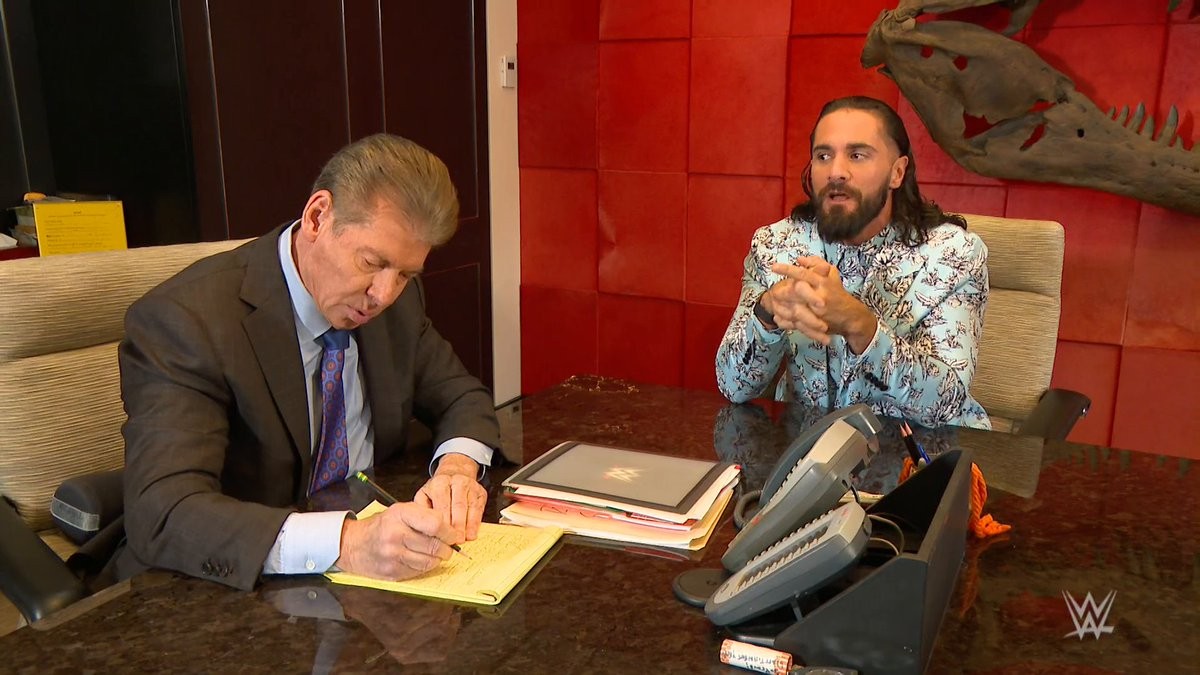 Seth Rollins is finally heading to WrestleMania; and it took Vince McMahon’s involvement to get him there! The Visionary has been pining for a match at the Most Stupendous Two-Night WrestleMania of All Time for a while. And it looks like he’s going to get his answer in the ring at Night 1.

#WrestleMania Saturday: A THREAD@WWERollins finally gets his @WrestleMania Match against an opponent of Mr. McMahon’s choosing! pic.twitter.com/gfQS4t2Fgt

Seth Rollins has had a tumultuous Road to WrestleMania 38

Poor Seth, he was at the top of the world when this year started. Seth Rollins kicked off 2022 with a WWE Championship match at WWE Day 1.

He went on to bust out his SHIELD gear at Royal Rumble 2022 for his Universal Championship match against Roman Reigns.

Though he was unsuccessful in capturing championship gold to make it onto the WrestleMania 38 card, his hopes were kept alive by his best friend Kevin Owens.

SethKO turned Raw upside down with their antics

SethKO were the highlight of Monday Night Raw and challenged for the Raw Tag Team Championships on the March 7th episode of Raw.

But after coming up short, KO called out “Stone Cold” Steve Austin for a confrontation at WrestleMania 38.

That left The Moment Maker without an opportunity to create a WrestleMania moment; though he has already created one of the most timeless ‘Mania moments of all-time already. Click here to know more.

After getting betrayed by a man who he thought was his best friend, The Visionary tried to take Kevin Owens’ ‘Mania spot. When that didn’t work, he went after AJ Styles, trying to place himself back into a rivalry with Edge.

.@WWERollins once again came up short in his quest for a #WrestleMania moment on #WWERaw… pic.twitter.com/4xTVydi71X

After losing what he thought was his last opportunity to create a WrestleMania Moment, Seth flipped out and destroyed the ring. It got the attention of Vince McMahon, who called him in for a meeting at this week’s WrestleMania Raw.

Seth Rollins is Mania-Bound but his Opponent will be picked by Mr. McMahon

If you need further proof of why Seth Rollins is the best thing in WWE, just watch his segment from last night’s WrestleMania Raw. He arrived 2 hours early, thought Vince was going to fire him, and then imitated Vince!

After being told that WrestleMania could happen without him, Rollins found out that he was indeed going to WrestleMania. But his opponent was kept under wraps. Vince McMahon said that Seth will “be introduced” to his opponent in the ring at Night 1.

Well that puts a bit of a damper on things…

WWE has the perfect opportunity to change the wrestling business here. They’ve teed up the ball perfectly, and need to swing the club just right. If it turns out that Cody Rhodes is not Seth’s opponent, and it’s someone like Austin Theory or Veer Mahan or something, that will highly upset Ronda Rousey (click here to know why). Please, Vince. Book this right.